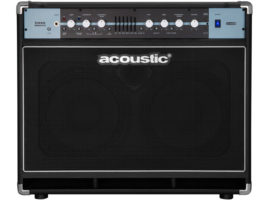 Acoustic freshens up its Classic Series with the B300C, B600C

These versatile combo amps serve up commanding bass tones.Earlier this year, Acoustic debuted its Classic Series with three compact combo amps. The brand has now added two larger models to the family: the B300C and B600C (pictured above).
The new models are solid workhorses that are geared towards both stage and studio use. They’re designed with a rugged enclosure, which aids portability, and Class D power amplification that delivers clean, commanding bass tones. Both amps retain certain Classic Series features, such as a tilt-back cabinet design, dynamic EQ sculpting, and a built-in blendable overdrive circuit.
B300C
The B300C produces 300 watts of pristine bass tones through a single 15-inch ferrite speaker. The amp has a five-band EQ and a Shape section that employs a “Frequency Notch” knob to shape midrange frequencies.
It also has new features that let you sculpt tone even further: “Super-Hi” and “Super-Low” buttons can be engaged for dedicated frequency boosts, while an “Acousti-Comp” button activates the amp’s built-in compression.
For I/Os, the BC300C’s back panel sports pre- and post-EQ XLR direct outputs that come complete with level control and ground-lift capabilities. There’s also a 1/8-inch headphone output for quiet practice and a 1/8-inch aux input.
Lists for $449.99
B600C
In the other corner is the B600C, a 600-watt combo amp that runs through two custom-voiced 10-inch ferrite speakers. Unlike its smaller sibling, this amp has a six-band graphic EQ alongside the Shape feature found on the B300C.
Additionally, the amp features level-cutting functions that include a -10dB input pad and a “Mute” switch. I/Os-wise, it ships with an effects loop, XLR output, 1/8-inch headphone out and 1/8-inch aux input.
Lists for $549.99
More information at acousticamplification.com.The post Acoustic freshens up its Classic Series with the B300C, B600C appeared first on The Guitar Magazine.