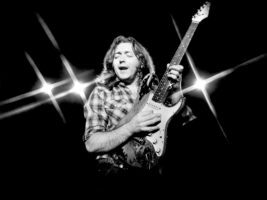 The 50th anniversary of legendary Irish-blues rocker Rory Gallagher’s album, Deuces, has been celebrated with 42 previously unreleased alternative takes, and so much more,

The musician has been commemorated after the half a century anniversary of his sophomore album in a special way, with a limited edition record which not only features the unreleased tracks, but also includes an original remix and remaster of the album, but a 64-page book with unseen photographs and foreword written by The Smiths’ Johnny Marr.
Marr has credited Gallagher as an inspiration for his own music created, recalling that “there was a day when I was playing along with the Deuce album, which was a complete turning point for me.”
You can listen to a sneak peek of the unreleased tracks below:

The entirely self produced album was originally released in November 1971, and captures the feeling of live performance, as Gallagher would often record tracks for the record immediately after coming off stage.
The 42 previously unreleased tracks include 28 alternative takes of the Deuce record, as well as seven Radio Bremen radio sessions, and a six-track 1972 BBC Radio in Concert recording, which Is also available separately on coloured vinyl.
UMC will be releasing the 50th Anniversary special of Deuce on September 30, and will be available in a quadruple CD deluxe set; double CD; triply vinyl; single coloured vinyl BBC in Concert, deluxe digital HD, and deluxe digital standard.
For more information about the special release, and ways to preorder, you can visit RoryGallagher.com.
The post Listen to Rory Gallagher’s previously unreleased tracks from anniversary edition of Deuce appeared first on Guitar.com | All Things Guitar.