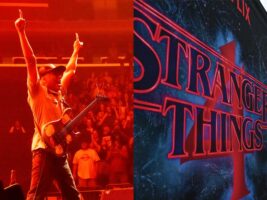 Rage Against The Machine’s Tom Morello has revealed he was once part of a Dungeons And Dragons club in high school, comparing himself to Stranger Things metalhead Eddie Munson.

The Netflix series has had a colossal impact on the music industry, having revived classics from Kate Bush and Metallica, and included a brand new metalhead character who played an epic rendition of Master Of Puppets in the spooky world of the Upside Down.
Joseph Quinn, who plays Eddie Munson, was even invited to jam backstage alongside the band at Lollapalooza, where he was gifted a signed custom B.C. Rich guitar. The band have also teamed up with the series to release collaborative merchandise with the Hellfire Club – the Dungeons and Dragons club which is a prominent theme throughout the show.
The series has been enjoyed by many figures in the music industry, and Morello has taken to Instagram to share a throwback snap of his own D&D club. In the caption he shares, “Long before the @strangerthingstv #HellfireClub there was the LIBERTYVILLE HIGH SCHOOL DUNGEONS & DRAGONS CLUB (1980). I will neither confirm nor deny that the fella in the back with the Afro and the LA Rams shirt is me.”

Rage Against The Machine have been out on the road for their Reunion Tour, back in July Morello was accidentally tackled by a security guard who was trying to get hold of an unruly fan. The band’s track Killing In The Name was also being mysteriously played on loop on a pop radio station earlier this summer where two presenters had been laid off.
The post Tom Morello reveals he was once part of a Dungeons And Dragons club appeared first on Guitar.com | All Things Guitar.