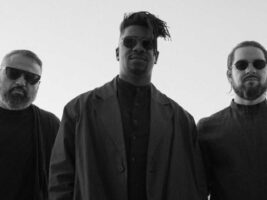 The new track, Monomyth, hasn’t arrived alongside any album announcement. However it has been confirmed that the band have inked a new deal with their current label Sumerian Records. They’ve been with the independent label since 2014’s The Joy Of Motion.
The band’s latest studio release was their 2016 record The Madness Of Many. Fans have been speculating about a new studio LP from the trio, after Abasi posted small previews of upcoming tracks on his Instagram.
Abasi said of the new song: “Monomyth is part fever dream, part ritual. Its imagery represents man’s ceaseless attempts to translate transcendent ideas into movement.
“The conflation of struggle with meaning,” he continued. “Pain with significance. The ultimate failure of distilling perceived patterns in the world into knowledge.”
Monomyth arrives alongside a surreal music video, directed by Telavaya Reynolds and featuring absolutely spectacular choreography and dancing from Tlathui Maza and the Nohbords dance group. Take a look below.

The post Listen to the first Animals As Leaders track in five years, Monomyth appeared first on Guitar.com | All Things Guitar.