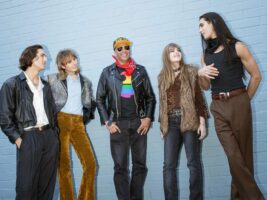 Måneskin to team up with Tom Morello for new single Gossip

Måneskin has teamed up with Rage Against the Machine’s Tom Morello for a new single named Gossip, which is set for release on 13 January.

READ MORE: H.E.R shreds as Belle in Beauty and the Beast Live

The Eurovision standouts took to Instagram to announce the news with a photo with the guitarist. The song is expected to be appear on the band’s third album RUSH!, which is being released on 20 January.
You can see the post below:

In a follow up for the release of the record, the Italian foursome released single LA FINE at midnight today (16 December), as well as the full tracklist, where the Tom Morello track sits at a relatively high number two spot.
“People have got our aesthetic – now we’ve got to show the inside,” says frontman Damiano David said about the upcoming record.
“It’s a new side for our new audience, but we’ve always been playing ballads.” Added bassist Victoria De Angelis. “That’s always been a big part of our music, so with this one we tried to experiment a bit more with the sound. We listened to a lot of Radiohead where they work a lot with pedals.”
Måneskin hit the headlines last month after they opened up about their approach to sex appeal in rock music.
Speaking to Guitar World they explained their thought process:
“We don’t feel like we should restrict ourselves in any way. There are underground bands that are like, ‘I’m not dressing up’ and all of that thing, and that’s cool. But we don’t care about that. We love to dress up and have fun,” says De Angelis.
She continued, “We know we can deliver the music, so we’re not all about image. But for us to look the way that we do, it’s just who we are. It’s rock ‘n’ roll.”
RUSH! will be released 20 January 2023.
The post Måneskin to team up with Tom Morello for new single Gossip appeared first on Guitar.com | All Things Guitar.