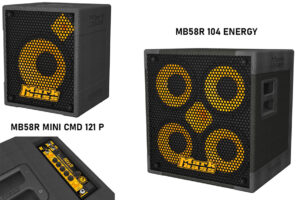 Markbass CEO and founder Marco De Virgiliis has announced an expansive and innovative new bass amplification series, MB58R, at a launch event near the company’s headquarters in Pescara, Italy on June 30.

The MB58R line—the name of which is comprised of the brand’s initials, Marco’s age and the letter R for Revolution—includes a dazzling array of 20 new cabinets, 8 combos, and two new heads. The trademark “true-to-the-source” tone that Markbass is known for remains the top priority, but it’s now delivered with a stunning next-level power-to-weight ratio—and these attractive, eco-friendly products are all made in Italy.

The ultra-light MB58R cabinets include 2×10”, 3×10”, 4×10”, 1×12”, 2×12” and 1×15” configurations, with three versions of each featuring a different tweeter type. The Energy cabinets feature a Markbass hi-fi tweeter (very smooth highs), the Pure series includes a 1” driver with custom horn (focused, crips highs), and the P series models have a new piezo tweeter for (more aggressive highs). Additionally, the 2×10 cabinets are all available in standard and XL versions: standard cabs have the two woofers arranged vertically, whereas the XL version is a larger cabinet with the speakers diagonally placed. The 3×10 cabinets are 6 ohms, all 2×10 and 4×10 cabs are available in 8 ohm and 4 ohm versions, and all other cabs are 8 ohms.

Markbass is famous for its distinctive yellow neodymium speakers; but in a departure for the brand, the P-series cabs feature Markbass custom classic ceramic speakers. Thanks to the new ultra-lightweight enclosures, these cabs still weigh a fraction of what traditional equivalents weighed before Markbass changed everyone’s expectations of what bass cabs should weigh in the early 2000s. For example, a traditional ceramic 4×10 weighs about 90 lbs; the MB58R 104 P (with ceramic speakers) is almost exactly half that weight: 45.53 lbs / 20.65 kg.

The Little Mark 58R (500W, solid state) is available as a standalone head and is also included in all MB58R combos. Unlike previous Little Marks, the 58R incarnation is designed with almost all the controls and connections on the front panel, for greater ease-of-use. It’s also even lighter than all previous Little Mark models, weighing in at an incredible 4.41 lbs / 2 kg.

The combos in the series include 2×10, 1×12 (standard and mini) and 1×15 models. Each of these is offered in both a Pure version (hi-fi tweeter, neodymium speaker) and a P version (piezo tweeter, ceramic speaker). These combos are 300W on their own; but connected to any external 8 ohm cabinet, can be transformed into a 500W rig. The smallest combo is the Mini CMD 121 P, which weighs only 19.44 lbs / 8.82 kg.

Markbass shook up bass amplification in the early 2000s with technological innovations that amounted to a revolution. Thanks to the incorporation of switching mode power supplies, surface-mount circuit boards, neodymium speakers and other cutting-edge components, Markbass set a new standard for bass amplification. The expectations of bass players were changed forever, and the entire industry followed. Now, 20 years later, Markbass is still leading the charge, and bass players around the world are the beneficiaries.