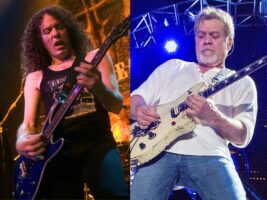 Marty Friedman wishes he had a guitar lesson from Eddie Van Halen: “I would definitely ask him to show me a thing or two”

In a new interview, ex-Megadeth guitarist Marty Friedman has expressed his appreciation for Eddie Van Halen – stating that if he could go back in time, he would “definitely ask” the virtuoso for a guitar lesson.

Although one of the most renowned guitarists in metal, it appears that even Marty Friedman feels that there is still room for improvement when it comes to his playing.
This topic arose in a discussion with Jonathan Montenegro yesterday (13 December), when the guitarist took part in the online series, My 3 Questions To. It was here that Friedman stated that he would have loved the opportunity to learn some of Eddie Van Halen’s techniques, straight from the man himself.
“I would definitely go to Eddie Van Halen [for a guitar lesson.] Why? Because he’s just a fantastic guitar player with a really, really good, juicy soulful way of playing,” he told the show’s host.
“[It’s] rhythmic and flashy and melodic, and he always plays in tune. I really, really like Eddie Van Halen’s playing a lot, so I would definitely ask him to show me a thing or two.”

Elsewhere in the interview, the ex-Megadeth shredder credited his eagerness to learn from musicians around him as the reason behind his well-rounded playing style.
“I get guitar lessons from everybody,” he insisted. “I’m very, very fortunate that I’ve been able to play with so many great musicians [and] I always am that annoying guy who says, ‘Dude, show me that. Show me that thing you just played. What was that first phrase in that solo that you just played? How did you end it? Why did you do this?’”
“I‘ve done that ever since I was a kid… It’s just a habit,” the guitarist added. “You pick up so many things along the way — whenever you see something interesting, you just pick it up.”
The post Marty Friedman wishes he had a guitar lesson from Eddie Van Halen: “I would definitely ask him to show me a thing or two” appeared first on Guitar.com | All Things Guitar.