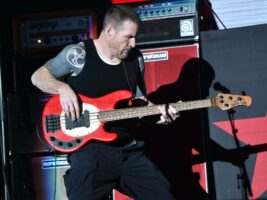 Tim Commerford, bassist for Rage Against The Machine, has revealed that he is currently battling prostate cancer and underwent a surgical procedure before going on tour this year.

READ MORE: Ozzy Osbourne Is Unsure Whether He Can Perform At Upcoming Shows: “I Just Can’t Fucking Walk Much Now”

In the emotional interview with Spin Magazine, the bassist was initially expected to discuss his latest single with new band 7D7D, when he confessed to the interviewer that he has recently received some tragic, personal news.
“I’ve been dealing with some pretty serious shit. Right before I was about to go on tour with Rage, I had my prostate removed, and I have prostate cancer,” he told the interviewer.
“I’ve been someone that’s taken a lot of pride in being in shape and taking care of myself, but it’s something where either you’re either lucky or not.”
According to Commerford, he initially only told close friends and family the news, and proceeded to discuss the immense psychological impact that the diagnosis has had on him:
“My whole life changed,” he said. “Prostate cancer is a very, very, very tough one because it’s connected to your sexuality. It’s hard to disconnect from that.”
“It’s a brutal psychological journey. I’ve been trying to find support groups, and it’s hard to find people and hard to talk about it,” he added.
“The physical suffering after the surgery, I’ve never felt pain quite like that. [Also,] psychologically, the damage is severe. It’s very hard for me to not break down and get emotional.”
In the discussion, the bassist took an increasingly optimistic outlook. Here, he recalled how the news has rekindled his love of songwriting, and said he aims to write a total of 100 songs with his 7D7D bandmate, Mathias Wakrat.
“Songwriting has become a catharsis for me,” he explained. “There’s this little light at the end of the tunnel that I’m seeing right now where I feel like I can get some really solid goodness from it in other areas.”
The post Rage Against The Machine bassist Tim Commerford reveals he is battling prostate cancer appeared first on Guitar.com | All Things Guitar.