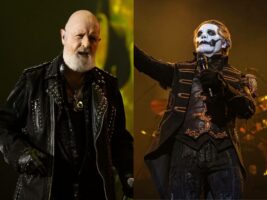 Metal legend Rob Halford has praised Ghost for ‘re-energising’ the rock and roll scene, which he suggests has lost direction over recent years.

When asked to choose his favourite track from Ghost in a recent interview, Judas Priest’s Rob Halford was quick to express his fondness for the band, and explain why he thinks they are having such a profound impact on the entire rock scene.
“Ghost are an important band on a variety of levels,” he told Revolver. “Rock and roll — I use that term loosely in this context — needs a band like Ghost to refocus and re-energize us.”
Halford continued to share his thoughts on the band – who reached the number two spot on the US Billboard this year with their album Impera – and celebrated frontman Tobias Forge for his songwriting talents.
“Tobias meticulously created and sought out, firstly, the strength of Ghost musically, and secondly, the crucial visual elements. Both have drawn us into his world of Emeritus mystery and intrigue,” he explained.
“As a fan, I am choosing the song Elizabeth [as a favourite] because of its valuable insight into the origins of Tobias’ singular manner of composition, arrangements and textures, whereby one can sense enormous potential.”
This isn’t the first time that the Judas Priest frontman has spoken out about the supposed decline of the rock scene.
Earlier this year, Halford took aim at the Rock and Roll Hall of Fame, stating that he was left feeling “pissed” when Judas Priest were granted an award for “musical excellence”, while artists from other genres were chosen to be inducted.
“I don’t know why they gave us the Musical Excellence Award. I have no clue,” he said.
“At the end of the day, does it matter? Some days, I go, ‘No, it doesn’t matter. We’re in the Rock And Roll Hall of Fame. Be grateful. Shut the hell up.’ And then there are other days where I’m like, ‘God damn, why did they give us the Musical Excellence Award?’”
The post Rob Halford says Ghost are helping the rock scene “refocus” appeared first on Guitar.com | All Things Guitar.