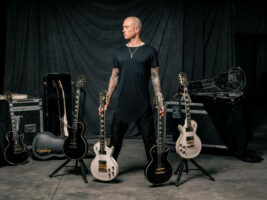 Trivium’s Matt Heafy has teamed up with Epiphone for a third time, launching a pair of modern-focused Les Paul Customs loaded with Fishman Fluence humbuckers.

The Matt Heafy Les Paul Custom Origins Collection comes in six- and seven-string editions in either Ebony and Bone White finishes – and southpaws, rest assured that both models are available in left-handed configurations.
Both guitars pack a pair of Matt Heafy’s Fishman Fluence Custom Series Signature Humbuckers, which are said to offer three distinct tones: two modern voices, along with a clear single-coil voice which coil splits through push-pull volume and tone knobs.
Construction-wise, the guitars feature a mahogany body and a maple top, along with a mahogany neck that’s been given a SpeedTaper D profile for zippy play, along with a contoured heel for high-fret access. And the guitar has been weight relieved, so you can effectively spend more on guitar gear and less at the chiropractor.
Both finishes come paired with gold hardware, which includes locking Grover Rotomatic tuners with Tulip buttons. Plus, they ship with a custom hardshell case.
Matt Heafy takes fans through his new signature model in the video below, have a look: