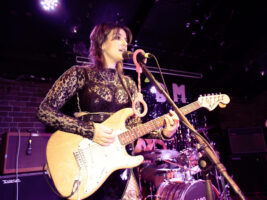 The global music industry is finally facing up to truths that women have known implicitly for decades: that the harassment, abuse and exploitation of women by men within the industry is endemic.

More than (67 per cent) of women responding to an American Music Industry Research Association survey had been sexually harassed, nearly half of UK women musicians have been sexually harassed at work, and almost half (45 per cent) of New Zealand women admit they don’t feel safe in places where music is worked on or performed.
Most recently, an Australian independent report “Raising Their Voices” surveyed more than 1,600 respondents, all of whom worked in the music industry. It revealed that 82 per cent of victims of sexual harm or harassment did not report it. More than half of those who did report it felt that their experience was dismissed or otherwise poorly dealt with, thus enabling abusers to continue their careers without consequence.
Almost 75 per cent of women respondents to the survey had been harassed, and more than 90 per cent reported negative discrimination from those in leadership positions, such as management and supervisors.
Image: Press
The gatekeepers
In an opinion piece for The Guardian earlier this year, film-maker Tamanna Rahman – whose investigation Music’s Dirty Secrets: Women Fight Back screened on the BBC in Northern Ireland – asked, years after Hollywood had its own reckoning with the predatory behaviour of men in positions of power, “Why did #MeToo bypass the music industry?” The answer was simple: “Just look at the gatekeepers”..
In 2017, the BBC revealed that sexual abuse and exploitation of women and minors was “endemic”. Yet few heads have rolled. There is a culture, much as there was in pre-Weinstein Hollywood, of men excusing their abuse, assault and exploitation of women as part of the hedonistic industry lifestyle.
But knowing is one thing. Making meaningful changes is another. “We are sorry… change is going to come” promised Australia’s peak music organisation APRA AMCOS in response to Raising Their Voices.
Female music industry workers would be entirely justified in responding, “Why hasn’t it already happened?” Sorry means nothing without measurable, imminent action.
Where women are in positions of leadership, and where women have a voice, there is enhanced security for other women.
They are also in a position to lift other women – in terms of their pay and in regards to their representation in media, awards and performance opportunities.
Australian women still earn less than men in the music industry, they’re underrepresented in radio playlists, festival lineups, in awards and judging panels, and on major industry boards according to research released in August by the University of Sydney’s Women, Work and Leadership Research Group (in a report called “Skipping A Beat”).
The Australian Record Industry Association (ARIA) only finally recognised women in their (still) male-dominated boards and workplace in 2018. Women are still disproportionately disadvantaged in technical and backstage roles, too. The report advised that women need to be visible and represented on boards, in leadership and that public funding ought to be decided upon gender criteria.

When she released Who Died and Made You King? it was a not-so-subtle stab at former, long-time Sony Chief Executive Denis Handlin who was the subject of an Australian investigate report on ABC’s Four Corners last year.
Jonze’s bravery and honesty has enabled women musicians to admit their own stories publicly and anonymously. It’s not the first time, and it likely won’t be the last time we lament men’s abuse of their power and dominance in the music industry.
Both Hewitt and Lienhop asserted that women have to have each other’s backs. Men – who vastly outnumber women in this industry – have to have our backs too, though. We are each part of the change, as professionals within the industry and/or as music lovers.
If the themes and experiences shared in this article have impacted you or someone you know, contact details for national mental health helplines from various countries can be found at the link.
The post Meet the guitarists calling for meaningful change to the way the music industry treats women appeared first on Guitar.com | All Things Guitar.