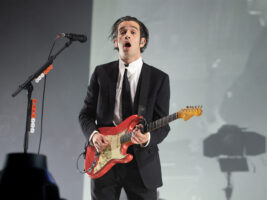 Matty Healy of The 1975 has shared his belief that the best art comes from those that push the boundaries of societal norms.

READ MORE: Strymon to announce an addition to its Sky Reverb range tomorrow

The loose-lipped frontman of one of the most popular indie bands of this generation spoke to NME for the release of the band’s fifth album Being Funny In A Foreign Language, which was released last Friday (14 October).
In the conversation, he spoke about balancing his art with humour and his experiences with cancel culture. Before noting that he refuses “to comment on the morally obvious” anymore, Healy explained, “​​My grandad was one of the first drag queens in the UK. I genuinely believe that a lot of the best art comes from transgressive communities like the gay community and cultures of colour.” He added, “If you want good art and good shit then leave people alone, let them do their thing! Don’t be racist and don’t oppress women! I’ve not said anything revolutionary…”
Healy issued an apology and deleted his Twitter account when users accused him of appropriating the Black Lives Matter movement to sell and promote his own music back in 2020, and he’s since been branded as “problematic” a few times too – something fans allude he now pokes fun at in his Instagram bio which reads “The Problem Attic”.
​​“We used to want our artists to be cigarette-smoking, bohemian outsiders. Now, we want them to be liberal academics.” he tells NME. “Well, on Twitter we do, but then I get really popular all of a sudden when I come back. Why’s that? Is that because I’m not pretending to be a liberal academic and there are real people who have actually got something to say instead of just continuing this infographic-sharing era of the same shit that we all fucking know?”
Being Funny In A Foreign Language is out now, you can listen to it below: