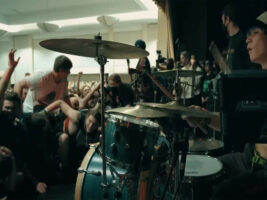 New footage recorded at Turnstile’s gig at Bryan Glazer Family JCC in Tampa, Florida back in January this year has been shared online, and it shows one heck of a lively crowd.

The band performed hits such as Blackout and Keep It Moving at the early 2022 show, and commenters shared their enjoyment with one writing, “there is absolutely no filler in this set.” This 17-track set was truly appreciated by a pretty gnarly crowd – just check out the flailing bodies and stage divers in the full recording below:

The video has since been talked about on Twitter too, with users noticing a stage diver holding a caution sign:

Watching the new hate5six Turnstile video and wtf is this? Did somebody just stage dive while holding a caution sign. pic.twitter.com/P9JCqscsUo
— Luis Perez (@zerepwrestling) October 16, 2022

Turnstile have been climbing the ladder to popularity since this show was recorded, the success of their 2021 record Glow On saw them perform on Jimmy Kimmel Live and The Tonight Show with Jimmy Fallon – a rare opportunity for hardcore bands.
The band are now even lined up to support Blink-182 on their newly announced world tour, where the pop-punk trio have returned to their original line-up with Tom DeLonge rejoining the band.
The hardcore outfit saw the departure of lead guitarist Brady Ebert back in August, the band shared a statement to Instagram which read, “Turnstile and guitarist Brady Ebert are parting ways. We are deeply grateful for our time together. Our love for him continues and we wish him nothing but the best moving forward.”
It was reported that drummer Daniel Fang filed a temporary peace order against Ebert on 4 August that would “prevent Ebert from abusing, contacting, or coming near Fang’s home or employment.” The order was reportedly revoked, however, on 11 August due to a lack of evidence. Following the departure, he was replaced for touring by Greg Cerwonka of Take Offense.
Get tickets to see Turnstile on tour at Turnstilehardcore.com.
The post Turnstile are unhinged in new concert footage shared by Hate5Six – Watch it here appeared first on Guitar.com | All Things Guitar.