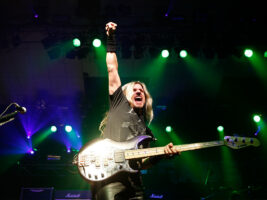 Megadeth’s touring bassist James LoMenzo has given fans a sneak peek of the band’s rehearsals for their upcoming Metal Tour Of The Year.

Earlier this week, Megadeth frontman Dave Mustaine announced that LoMenzo would be rejoining the band on tour, replacing ex-bassist David Ellefson. Now, LoMenzo has shared on Instagram photos of himself with the band’s mascot Vic Rattlehead, drummer Dirk Verbeuren’s drum kit, and a flight case emblazoned with the band’s name.
“I want to take a moment to sincerely thank all my friends and the amazing Megadeth fans who took the time to wish me well this week,” he wrote in the caption.
“Tour prep has been a blast, it’s great to be playing with Dave again! I’m finding that with Kiko [Loureiro, guitarist] and Dirk, Megadeth feels like a Locomotive bearing down the tracks. I can’t wait to see you all out there on The Metal Tour of the Year!” he added.

The tour, co-headlined by Lamb Of God, kicks off this Friday (20 August) in Austin, Texas and will run until October. The bands will be joined by Trivium and Hatebreed.
LoMenzo is replacing Megadeth co-founder and former bassist David Ellefson, who was dismissed by the group in May following allegations against Ellefson of sexual misconduct involving an underage girl. Ellefson has denied the allegations and has filed a police report against the person who leaked the video that prompted the accusations.
LoMenzo first joined Megadeth in 2006, and recorded the studio albums United Abominations (2007) and Endgame (2009) with the band. He was replaced by Ellefson in 2010.
In a statement last week, frontman Dave Mustaine said that he was “happy” about LoMenzo’s return, and “cannot wait to start crushing North America” with him.
Last month, in a birthday video addressed to a fan on Cameo, Mustaine revealed the title of Megadeth’s 16th studio album: The Sick, The Dying and The Dead. Mustaine also confirmed that Ellefson’s bass tracks for the upcoming album have already been re-recorded by a mystery bassist.
A release date for the new Megadeth album has yet to be confirmed.
The Megadeth and Lamb of God tour is set to kick off on 20 August, starting in Texas. Tickets can be purchased here.
The post Megadeth’s touring bassist shares behind-the-scenes photos from upcoming North American tour  appeared first on Guitar.com | All Things Guitar.