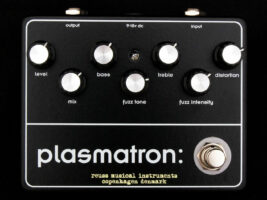 Mogwai’s Stuart Braithwaite has teamed up with Reuss Effects for a signature drive pedal entitled the Plasmatron.

READ MORE: The Big Listen: Mogwai – As The Love Continues

The pedal takes inspiration from two pedals: one, the obscure 1990s Danelectro Fab Tone distortion used extensively by Braithwaite, and the other, an op-amp-based Big Muff. The addition of the secondary fuzz circuit on top of the Fab Tone-inspired circuit was in order to “expand the noise textures even further.”
Some tweaks have been made to both circuits. The range of gain on offer from the Fab Tone has been expanded with an internal switch that reduces the level of the input signal. This means that when this switch is engaged, the Distortion knob has a much wider sweep, ranging from light drive to full-bore distortion. This is in contrast to the original 1990s pedal, which Reuss described as being “pretty much full-on all the way of the range of the distortion control.”
The Big Muff also has the addition of an internal Tight switch inside, which reduces some of the flabbiness of the bottom end that Muff-style circuits are known for.
The two circuits share a footswitch, and are adjusted with a set of seven controls: Level, Mix, Bass, Fuzz Tone, Treble, Fuzz Intensity and Distortion. The sounds are in parallel rather than series, and so the Mix control blends between either side of the pedal. You can isolate either circuit with the Mix control at its extremes.
For even more tonal variance, the pedal will happily take up to 18V through a standard pedal power supply jack. This means you can run it with some extra headroom for huge dynamic range.
The pedal’s graphic design was done by Aidan Moffat of fellow Glaswegians Arab Strap. It’s available to preorder now via reusseffects.com for the price of €199.95, and is due to ship in the autumn of this year.
The post Mogwai frontman Stuart Braithwaite gets a signature dirt pedal from Reuss Effects appeared first on Guitar.com | All Things Guitar.