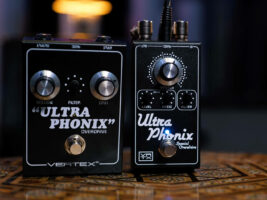 Vertex Effects updates the Ultraphonix to MkII, with a smaller case and more controls

Vertex Effects has introduced MkII of its Ultraphonix overdrive pedal. The new version packs the same Dumble-esque drive tones into a smaller enclosure, and tweaks the control set a little.

The biggest addition to the pedal is the new Level control. This adjusts the volume of the signal at the input stage – meaning even if you have low-output pickups, you can hit the pedal hard and get some natural grit out of it. The rest of the controls remain, albeit slightly renamed. Volume is now Master, Gain is now Ratio, but Filter is still called Filter.
The biggest removal, however, is about a third of the enclosure – the pedal is now much skinner, but still bears top-mounted jacks for easy pedalboard arrangement.
The circuit inside recreates Dumble-style overdrive, and was voiced alongside four real Overdrive Special amplifiers which Vertex Effects somehow got its hands on. The Overdrive Special is one of the most sought-after boutique amplifiers ever, with some units fetching over $100,000.
Hear the pedal in action with Vertex’s official demo below.

The pedal is available to preorder now exclusively at sweetwater.com, for the price of $199.
The post Vertex Effects updates the Ultraphonix to MkII, with a smaller case and more controls appeared first on Guitar.com | All Things Guitar.