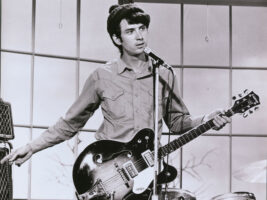 Monkees singer and guitarist Michael Nesmith has died at the age of 78. Nesmith wrote some of the bands’ most enduring tracks, such as The Girl I Knew Somewhere, Good Clean Fun and Listen To The Band.
Nesmith’s family said in a statement: “With infinite love we announce that Michael Nesmith has passed away this morning in his home, surrounded by family, peacefully and of natural causes. We ask that you respect our privacy at this time and we thank you for the love and light that all of you have shown him and us.”
Last month, the band wrapped up a farewell tour that Nesmith took part in. Their manager, Andrew Sandoval wrote in a statement: “That tour was a true blessing for so many. And in the end, I know that Michael was at peace with his legacy which included songwriting, producing, acting, direction and so many innovative ideas and concepts. I am positive the brilliance he captured will resonate and offer the love and light towards which he always moved.”
Nesmith successfully auditioned for the TV Sitcom The Monkees in 1965. The anarchic show portrayed a band trying to make it as America’s answer to the Beatles, with the band releasing music alongside the programme. Their initial success came from songs such as I’m a Believer and Daydream Believer.

However, with the growing success of the show and the band, Nesmith grew dissatisfied with how little control they had over their music. In 1967, he led the charge against producer Don Kirshner, ousting him and allowing the Monkees more say over their musical direction. Their third album, Headquarters, would feature the Monkees’ songwriting and instrumental performances much more heavily.
The Monkees split in 1970. Following their dissolution, he formed the country rock group The First National Band. They released three albums between 1970 and 1971, a process made easier due to Nesmith’s sizable catalogue of unused songs. Despite some moderate success with the single Joanne, the band also split in 1971 after their last album failed to chart.
As a solo artist, Nesmith’s discography includes 13 studio albums, many of which have an eclectic musical approach or an overarching concept. His most recent studio album was The Ocean, released in 2015.
He rejoined a reformed Monkees permanently in 2012, after participating in their 1996 album Justus and a short UK tour. The Monkees’ farewell tour began earlier this year, with the band playing their final show at the Greek Theater in Los Angeles on 14 November.
The post Monkees guitarist, singer and songwriter Michael Nesmith has died aged 78 appeared first on Guitar.com | All Things Guitar.