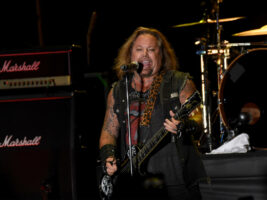 Mötley Crüe sell catalogue to BMG for an estimated $150 million

Hard rock band Mötley Crüe have sold their recording catalogue to BMG, with some estimates placing the value of the sale at $150 million dollars.

The sale includes all of the band’s recorded releases, totalling nine studio albums starting with their 1981 debut Too Fast For Love and ending with their 2008 record Saints Of Los Angeles, and encompassing hits such as Kickstart My Heart, Girls, Girls Girls, Shout At The Devil and the power ballad Home Sweet Home.
A source told Variety that the estimated total for the sale was $150 million, however other sources claimed a “significantly lower” dollar value on the sale. Variety stated that this discrepancy could be attributed to the way the deal is being paid for: it’s possible the smaller estimate is what has been paid upfront, with the rest of the value of the sale being paid on completion of the band’s 2022 North American tour.
In a joint statement, Mötley Crüe said: “It feels amazing to be collaborating with our new partners at BMG. Their extensive track record of success in rock made them the perfect home to continue preserving and growing our musical legacy, ensuring we always stay at the top.”
BMG CEO Hartwig Masuch added: “This is more than just a significant transaction. It’s a new chapter for an extraordinary catalogue. Few bands understand the myth and the magic of rock like Mötley Crüe do. In an increasingly competitive rights acquisition market, artists need to be convinced that a buyer will do the right thing with their work. I am delighted that Mötley Crüe have decided BMG will be the best custodians of their musical career.”
Mötley Crüe join BMG’s diverse and extensive roster. It currently manages works by Ringo Starr, John Lennon, David Bowie, Buddy Holly, Ed Sheeran, The Weeknd, Major Lazer, Justin Bieber and Adele.
The post Mötley Crüe sell catalogue to BMG for an estimated $150 million appeared first on Guitar.com | All Things Guitar.