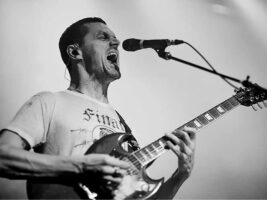 The Genius Of… Today’s Empires, Tomorrow’s Ashes by Propagandhi

Today’s Empires, Tomorrow’s Ashes is perhaps defined more by differing perspectives, both from inside and outside the band, than it is the time in which Propagandhi made it. To hear them talk about the way their third LP sounds lends the impression that it is a steaming turd. It’s Ishtar, it’s John Travolta’s dreadlocks in Battlefield Earth. It’s too fast. Its guitars sound like mosquitoes. Its mix is devoid of low end. “It really is a collective effort to fucking ruin a record for 20 years,” was how guitarist-vocalist Chris Hannah put it in a podcast last winter.

READ MORE: Converge & Chelsea Wolfe – Bloodmoon I review: This is Converge like you’ve never heard them before

Ask someone who scarfed down Today’s Empires, Tomorrow’s Ashes in 2001, though, and you’ll get a different view. If you were a fan of the band at the time, the first time you heard the record, you might be forgiven for thinking that someone had slipped the wrong CD into the case. How could the Propagandhi we knew – the skate-punk band on Fat Wreck Chords – make this insane blend of melodic hardcore and thrash-metal technicality?
Brendan Kelly, who has been writing great punk rock songs for 25 years with Slapstick, the Broadways and the Lawrence Arms, once tweeted: “In my experience, there are two kinds of punk rock songwriters: those who wrote Back to the Motor League and those who wish they did.” So, how did we get here?

All change
Neil Sedaka was right about one thing: breaking up is hard to do. Even when it’s demonstrably a good idea it’s difficult to untangle feelings, aspirations, old wounds, all that baggage. It was a great idea for bassist John K. Samson and Propagandhi to part ways in the mid-90s, following the release of their second album Less Talk, More Rock, but it still stung. “I was angry, I think,” Samson told Exclaim! a few years ago. “And I think looking back now what I was most angry about was that I wasn’t good enough to be in the band. I wasn’t a good enough player. And I think that’s just true, it’s nothing to be ashamed of. But at the time I was, I was ashamed that I didn’t have the ability.”
Now, ability is certainly the wrong word here. He was just cut from a different cloth. His songwriting aims (as detailed by the elegiac, all-timer sore thumb Anchorless on Less Talk, More Rock) deviated from the path that Hannah and drummer Jord Samolesky saw opening up ahead of them. The split paved the way for Samson to form the Weakerthans, one of the finest indie-rock bands of their generation. It also paved the way for Propagandhi to submit to the thrash demon that had been lurking in the shadows.

Metal zone
Hannah and Samolesky formed Propagandhi in Portage la Prairie, Manitoba, in 1986. Initially they cycled through bass players with the regularity of most early-phase punk groups. By the time Samson saw a flyer seeking their latest bassist in a skate shop, they were calling themselves a “progressive thrash band”. That wasn’t really an accurate description back then, but it had become a pretty handy catch-all by the time Todd Kowalski darkened their door midway through touring Less Talk, More Rock. He brought a different energy to the table. His songs were ragers, his voice a bullish hardcore yell at odds with the almost brittle talk-singing favoured by Samson.
Today’s Empires, Tomorrow’s Ashes is the first building block in a sound that has over time become more dense, more technical, and more outwardly indebted to the bands that caused Hannah to pick up a guitar in the first place: Venom, Metallica, Slayer, Exodus, Sacrifice, Voivod. “If you hear our demos before How To Clean Everything it’s much more metallic but really amateurish,” he once told Premier Guitar. “I couldn’t sing properly. Couldn’t play guitar like the metal bands I liked. [With] How To Clean Everything, I was like, ‘Oh, this is easy.’ NOFX, Bad Religion, that’s easy shit. Then we just got better, got closer to the goal.”
While demoing new songs in the wake of Less Talk, More Rock – a record that infuriated both skate-punk jocks and the Nazis who used to show up at Propagandhi shows looking for a fight with its “pro-feminist, animal-friendly, anti-fascist, gay-positive” sleeve message – they sought to put open water between themselves and their peers. Samson had gone indie, and the punk scene at large felt to them like it was leaning towards college-rock. They decided to play fast, all the time. Hannah wanted his guitar to sound like it was a chainsaw cleaving your head open. Great, on paper. In reality, these beliefs created a cartload of problems. “There’s a reason why my fucking elbow’s fucking almost falling off,” Samolesky told Exclaim!. “Those guys and their relentless fucking speeding up of everything.”

Backseat drivers
Today’s Empires, Tomorrow’s Ashes was recorded with Ryan Greene between Motor Studios in San Francisco and Mid-Can Studios, Winnipeg at a time when he was essentially Fat Wreck’s version of Spot, the old in-house engineer for Greg Ginn and SST. During his partnership with Fat Mike he produced a huge number of influential Epi-Fat albums, from NOFX’s Punk in Drublic to Less Talk, More Rock. Propagandhi wanted something different this time – the mics in a room, play some songs approach that had worked on their previous record was out.
The problem, as they see it today, is that they couldn’t communicate what they actually needed. “He did what we said, but what we were doing wasn’t what we wanted,” Hannah said on his podcast, adding: “We were giving him this mishmash: here’s the kick from Leprosy, here’s the guitar from this Sacrifice record…”
The guitars were tracked twice. The first time around Hannah played an Ibanez RG570 with a Seymour Duncan Livewire active pickup, which required him to carve a space in the guitar’s body to accommodate a 9V battery. That ran into a Mesa/Boogie Mark IV and a range of Marshall and Mesa cabs. The next time around he played the same gear, but he backed off the gain a bit, either changing the pickup or leaving it passive. No dice. “I fucked it up again. It’s unbelievable,” he told Vice.
The mixing and mastering experience, too, was a litany of disappointments to rake over for the band. There were samples added on the kick and snare, and they fidgeted and got in the way. “We really screwed up what could have been like Less Talk…, a very natural sounding record, and we made it sound really weird,” Hannah told Exclaim!. “We just couldn’t leave well enough alone. We had no recording experience, and here we are telling Ryan Greene or Eddy Schreyer how it should go? It’s crazy. It’s ridiculous. It’s one of my bigger regrets.”

A do-over
But, again, have you heard Today’s Empires, Tomorrow’s Ashes? It’s a truly exciting, muscular, boundary-pushing punk record. The 20 years since its release suggest its mix of furious political polemics and high-wire melody could only have been pulled off by Propagandhi. It does sound a little condensed, a tad artificial in places, but it’s also resolutely face-melting.
Hannah’s countermelody leads on Albright Monument, Baghdad and Natural Disasters are thrilling. The solo on Back to the Motor League likes to party fuckin’ hard. Kowalski’s vocals are paint-peeling. But the band were not to be dissuaded. “I have the master tapes and I go listen to those sometimes,” Hannah told Vice. “I wish we could remix it, but nobody ever wants to hear a remixed 20-year-old record.”
Record scratch, etc. Oh, how they do. Remixed and remastered from original tapes by Jason Livermore at Colorado’s Blasting Room, the recently-released 20th anniversary reissue of Today’s Empires, Tomorrow’s Ashes does add weight to the band’s initial complaints. The songs are, naturally, still top-drawer rippers. But the drums now sound enormous, and Kowalski’s bass is a grinding, insistent presence. The guitars, meanwhile, have recovered a sense of grit and snot. Finally, two decades later, we can all agree that this is a classic record that sounds fantastic. Is that closure? Fuck off, who cares?

Standout guitar moment
Back to the Motor League

For more reviews, click here.
The post The Genius Of… Today’s Empires, Tomorrow’s Ashes by Propagandhi appeared first on Guitar.com | All Things Guitar.