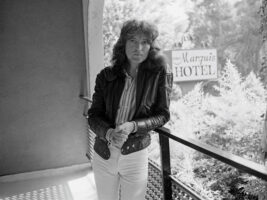 Ozzy bassist on how George Harrison downplayed The Beatles when they met: “he made it sound like he used to be in some band”

In a recent interview, Bob Daisley, most widely recognised for his contribution to Ozzy Osbourne albums Blizzard of Ozz and Diary of a Madman, has spoken about his time meeting George Harrison – stating that he was taken aback by the guitarist’s attitude toward the Beatles.

One of the most highly prolific bassists of the 1970s and 1980s, working with acts including Uriah Heep, Black Sabbath and Ritchie Blackmore’s Rainbow, Daisley opened up about his relationship with the Beatle during an appearance on the Artists on Record podcast.
In the episode, Daisley described how he first came to meet Harrison through his close relationship with Gary Moore”
“Gary lived in a place just outside of London where George’s big house was, and Gary was mates with him,” said Daisley. “George turned up at one of our shows when we played the Hammersmith Odeon in London. […] Ever since I had been about the age of 13, 14, I’d been a major Beatles fan.”
“George stood on my side of the stage for the whole show. It was only about, maybe, I don’t know, fifteen [or] eighteen feet away from me. […] I was only in my 30s at that point, but it meant an awful lot to shake George Harrison’s hand, that hand – one of those two hands that did all that stuff. He was very, very sort of placid guy, and nice, you know? That meant a lot to me.”
Daisley proceeds to elaborate on Harrison’s immensely humble approach when discussing the Beatles, stating that when the topic arose, he was left surprised at the extent to which the guitarist downplayed his success.
“I talked to him, but… he made it sound like he used to be in some band, and that they used to play there, at the Hammersmith Odeon,” he says. “I felt like saying, ‘Hang on, you’re George Harrison! The band you’re talking about is the Beatles, ey!’ He was very sort of humble about the whole thing.”
Elsewhere in the interview, Daisley also described his time working alongside the late, great Gary Moore when he was a young guitar prodigy, describing their friendship as something that others failed to understand:
“[While he was] very serious about music and all that, [… he also] had such a great sense of humour, very witty, very clever, very sharp [too],” he reminisces. “He and I got on like a house on fire because quite often, if it was a load of people in a room, we were on our own wavelength kind of thing. We used to joke about things… other people didn’t get our joke, but we were definitely on the same wavelength. He was a very astute person, a very astute musician as well.”
Other recollections from meeting some of the most influential artists in the rock world can be found in Daisley’s set of memoirs, entitled For Facts Sake.
Bob Daisley’s full interview with the Artists on Record podcast can be found below.

The post Ozzy bassist on how George Harrison downplayed The Beatles when they met: “he made it sound like he used to be in some band” appeared first on Guitar.com | All Things Guitar.