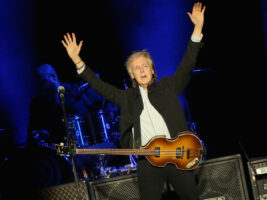 Paul McCartney has said he still has several more “story songs” written in the same process of Eleanor Rigby he’s not released yet.

READ MORE: How to play chords like Paul McCartney (Part 1)

Eleanor Rigby from the 1966 studio album Revolver is one of the most memorable tracks from the Beatles, bending pop conventions back then with its unique style of storytelling and chamber music instrumentation.
In an interview for the September 2021 issue of Uncut magazine, McCartney explained he still has some “story songs” left in storage, though they may never see the light of release day.
“I’ve still got a few that I haven’t released,” McCartney said. “Because I don’t think they’re that good.”
He added: “It’s quite a fun thing to do, to just dream up a name of a character and try and write the story of that character and then make it fit with another character. Eleanor Rigby, I did it with just the few. Father McKenzie and Eleanor.”
McCartney also commented on Eleanor Rigby’s strong public reception, saying he thinks it’s owed to its grimmer tone.
“With my story songs, a lot of them, besides Eleanor Rigby, tend to be comedy,” he said. “It’s me doing the tongue-in-cheek thing, whereas Eleanor Rigby was more serious. I think that’s why it was more successful.”
In other Beatles news, director Peter Jackson has spoken about The Beatles: Get Back, his upcoming documentary series on the Fab Four, saying that fans may be surprised by how “intimate” its footage is. “The music isn’t at the forefront of this film: weirdly, it’s what goes on behind the music at the forefront,” he said.
The post Paul McCartney says he still has “story songs” in the style of Eleanor Rigby he won’t release appeared first on Guitar.com | All Things Guitar.