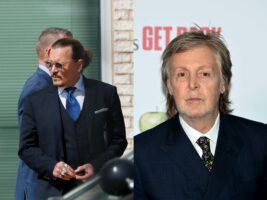 The Beatles icon Paul McCartney appears to have shown his support for his longtime friend actor Johnny Depp, at his concert in Seattle, USA, in the midst of the trail between Depp and his ex-wife Amber Heard.

79-year-old McCartney, who is currently on the road for his Get Back tour, sat at the piano to play his song, My Valentine, whilst showing the music video which features Depp.
Depp, is currently locked into a court battle with ex-wife, Amber Heard, amid his defamation suit for an article she wrote in the Washington Post back in 2018, in which she detailed her alleged experience as a survivor of sexual violence.
The video shows Depp (as well as actress Natalie Portman) showing sign language along to the song’s lyrics, as the actor sits behind his acoustic guitar. Lyrics such as “I know that someday soon the sun is gonna shine” are sung by the music legend, in a potential ballad of support for Depp.
No outright comment has been made by McCartney himself regarding the ongoing lawsuit, and the singer dedicates the track to his wife Nancy, who is in the audience. You can watch the video of McCartney’s performance below.

This isn’t the first time McCartney has played the video at his live shows, but fans believe this is a strong message of support.

Paul McCartney played with a huge photo of #JohnnyDepp in the background. What a lovely way to support him. #JohnnyDeppIsInnocent#JusticeForJohhnyDepp pic.twitter.com/XoR8UuNtrN
— Jo Be the change you wish to see in the world (@Jotan70) May 4, 2022

The trial between Depp and Heard is yet to conclude.
Tickets for Paul McCartney’s on going tour can be found on his website here.
The post Paul McCartney seems to show support for Johnny Depp whilst on tour appeared first on Guitar.com | All Things Guitar.