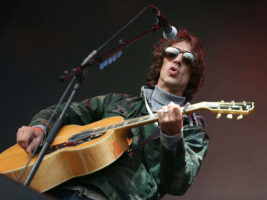 Ex-Verve singer Richard Ashcroft has dropped out of the lineup of Tramlines festival, after the event announced plans to become part of a government-backed research programme into safely conducting events post-COVID.

READ MORE: Trivium’s Matt Heafy has tested positive for COVID-19: “Thankfully due to being vaccinated it merely feels like a tour cold”

At the moment, almost all COVID-19-related restrictions are set to end in the UK on 19 July – four days before the festival begins. Tramlines is currently set to still have its full capacity of 40,000 attendees, and no social distancing or masks will be required. The Events Research Programme will instead use the NHS Track And Trace app and testing to collect transmission data.

This, apparently, was enough to make Ashcroft drop from the bill. On Instagram, he wrote: “I had informed my agent months ago I wouldn’t be playing concerts with restriction. The status of the festival was one thing when I signed up for it, but, sadly was forced to become something else.”
Ashcroft also hit out at the festival for still advertising his presence on the bill when he allegedly had told them he wouldn’t be playing “over 10 days ago.” He wrote on Twitter that “he is not appearing at the Tramlines festival on 24 July. He does not understand why he is billed as appearing. Once he was advised that he could only appear subject to certain government restrictions he immediately advised the organisers that he would not appear under those circumstances.”
It’s unclear which restrictions Ashcroft is referring to. It’s possible he means the requirement for attendees to show proof of full vaccination or a negative lateral flow test in order to minimise transmission at the event.
However, at the event itself no other restrictions will apply. Masks and social distancing will not be required as the dates of the festival are set to take place after the planned lifting of restrictions. And, as part of the same pilot plan as events such as the Download Pilot, it’s possible that no masks or social distancing would be required even if the lifting of restrictions is delayed.
Distraught fans who were hoping to see Ashcroft can claim a refund for their festival ticket until the morning of 8 July. Tramlines festival organisers told the BBC that they were “surprised” at Ashcroft’s announcement but that they would find a replacement Sunday headliner. The other headliners at the event are The Streets and Royal Blood.
The post Richard Ashcroft drops out of full-capacity Tramlines festival after it joins government-backed Events Research Programme appeared first on Guitar.com | All Things Guitar.