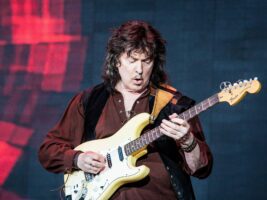 Former Deep Purple guitarist and co-founder Ritchie Blackmore has looked back on his final days in the band, a time where he was apparently feeling uninspired due to a supposed lack of ‘melodic’ material.

READ MORE: The Beths on the unconventional amps and DIY improvisations that created the standout guitar moments on Expert In A Dying Field

The musician was speaking in an interview with Long Island Weekly, where he discussed his songwriting approach as well as the band’s music in the days leading to his final departure.
“I’m not really interested in the modern approach with modern instruments,” Blackmore said. “We use synthesizers on certain things, but they are there to see how we’re going to progress with the other instruments. It’s all about going back to the basics — simple music.”
“Melody is very important to me. It’s an important thing. That’s why, even in Deep Purple, towards the end, before I left, our music was a bit monophonic. There wasn’t too much melody and if I don’t hear a melody, I can’t be inspired.”
The guitarist also weighed in on modern rock bands and their apparent lack of “melody”, saying, “I find that with a lot of hard rock bands today — not the death metal or whatever — the melody is certainly not there and I can’t relate to that.”
Despite being the mastermind behind many of Deep Purple’s most memorable riffs (such as Smoke On The Water), Blackmore has not played with the group since his final departure in 1993.
The band have also recently announced that guitarist Simon McBride will be joining the band as a permanent member, following Steve Morse’s exit to take care of his wife Janine, who is battling cancer.
“Simon’s playing is up there with the greats,” an official statement reads. “Of course, Steve can’t be replaced, the same as Ritchie, and Steve has a long legacy with Deep Purple. In Simon we have not found a replacement, but an extraordinarily talented and exciting guitarist in his own right.”
The post Ritchie Blackmore says Deep Purple’s music was “a bit monophonic” during his final days in the band appeared first on Guitar.com | All Things Guitar.