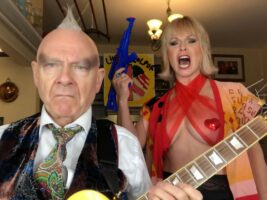 King Crimson’s Robert Fripp and Toyah Willcox are back to spice up your Sundays with another cover of Living Colour’s Cult Of Personality in this week’s Sunday Lunch series.

Back in March, just days after Russia invaded Ukraine, Fripp and Willcox performed an unusually solemn version of the 1988 classic in a show of solidarity with the citizens of Ukraine.
This week, the duo have revisited the song, adding a dash of the flair and playfulness they are known for. In typical Sunday Lunch fashion, a Living Colour painting hangs in the background alongside a peace sign as Willcox belts to the punk rock track. In addition to her powerhouse vocals, the musician was also armed with a plastic toy gun throughout the song.
As a bonus for fans, Cult Of Personality is immediately followed by Barefoot On Mars, a track from Willcox’s 2021 studio album Barefoot On Mars.
“We take [another] look at this belter of a song,” reads the caption of the video. Check out the cover below:

The pair’s popular Sunday Lunch video series began back in 2020, and has heard them cover a range of classic hits including Neil Young’s Rockin’ In The Free World, Black Keys’ Lonely Boy, Billy Idol’s White Wedding, and Edwin Starr’s War. Fripp and Willcox have also expressed their support for Ukraine in several episodes of Sunday Lunch over the past weeks.
Last month, a new documentary on King Crimson, In the Court of the Crimson King – named after the pioneering progressive rock band’s debut album – premiered at the 2022 SXSW film festival. The documentary features in-depth interviews with co-founder Fripp as well as former members of the band, and is described as “a dark, comic film for anyone who wonders whether it is worth sacrificing everything for just a single moment of transcendence”.
The post Robert Fripp and Toyah revisit Living Colour’s 1988 classic, Cult Of Personality appeared first on Guitar.com | All Things Guitar.