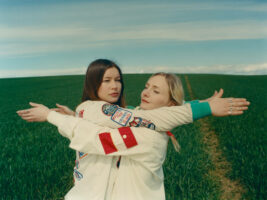 “I’m not sure if this is a song, I don’t even know what I’m saying,” admits Rhian Teasdale on Wet Leg’s eponymous debut. The confessional stream-of-consciousness mid-section of sparkling closer Too Late Now fractures the often comic-strip facade of a record that captures the unease of the 2020s like few others. Across its 12 tracks, Wet Let light the kindling of intimate disappointment, restless social anxiety, the blind alleys of academia and the fleeting thrills of hometown hedonism – and then gleefully stoke the flames.

READ MORE: The Genius Of… AM by Arctic Monkeys

Ever since the viral boom of debut single Chaise Longue in June 2021 (complete with cottage-core parody video), Wet Leg have been met with near-ludicrous hype. The duo’s five electrifying follow-up singles, kicking off with the bouncy Wet Dream, continued to jolt a lockdown-stiffened industry from its slumber, and gave rise to breathless premonitions of world-beating success.

Formed in 2019 by former music college students Hester Chambers and Rhian Teasdale (bolstered by additional live guitar and keys, bass and drums), Wet Leg’s essence is the interplay between its two frontwomen. Though drawing on new-wave punk, slacker minimalism and classic pop, accompanied by crafty vocal production and a solid rhythm section, Wet Leg’s sound and personality feels enticingly fresh.
Those expecting their debut record to be a compendium of spritely, party-ready tracks will find much to savour here. But Wet Leg is at its most beguiling when its thematic and musical ambitions are laid bare. The introspective I Don’t Wanna Go Out is an early indication of its complicated depths, the drama of its downcast chord sequence matching a lyric that faces the dawning shadow of adulthood. Further cuts, such as the shimmering Loving You and self-deprecating Piece of Shit, reveal colourful forays into dream pop and gloomy acoustic-led angst. In this context, then, Wet Leg’s hook-driven bangers are put through a new prism, working in counterpoint to the record’s emotional conflicts and tonal shifts.

The laddering riffs of Ur Mom and the awkward, angular brilliance of Angelica, perhaps the album’s finest track, match up to the propulsive tone of Wet Leg’s initial salvo of singles, and both songs became singles in their own right. Angelica’s brilliance lies in how it reframes a relatable social anxiety (“The ambience was overrated at the party / I want to run away before it’s even started”) into a defiant deconstruction of the empty promise of enforced fun. It’s matched by an inspired musical framework led by cleverly crafted, octave-tilted riffs.
Image: Hollie Fernando
Angelica is just one example of Teasdale and Chambers’ captivating use of guitar. Responding to the record’s changing shapes, the guitar provides the core riff of Oh No, the reverb-soaked light twinkling on the horizon of closer Too Late Now, the Beck-esque acoustic patchwork of Supermarket, and the springy thorn in the side of the pained epic I Don’t Wanna Go Out. Wet Leg’s arrangements, elegantly produced by Speedy Wunderground’s Dan Carey, often economise guitar, fuelling its impact when it re-emerges or colours the mix in textural ways.
Frequently, Teasdale and Chambers put aside their Jag and Strat to allow close-mic’d vocals to take the lead, as with the Jane Birkin-meets-The Strokes pep of Chaise Longue’s loaded verse, and the touching Loving You. But, when required, the pair show considerable teeth. From the sludgy Convincing and the fuzz that envelops opener Being in Love to the distortion that batters Angelica’s wobbly structure, Wet Leg’s overdriven outbursts stress a visceral, punkish spirit that flows through the record.

Modernity is a stifling, omnipresent theme here, evident in the lyrics of Oh No and its phone-scrolling time-sinks, Too Late Now and its dangerous dating apps, and I Don’t Wanna Go Out and the hunger to simply ‘Ctrl-Alt-Delete’ emotional mistakes. The lyrics’ interplay of tech and all too human feelings of alienation will resonate many, particularly in the midst of a decade so far defined by contact-limiting.
Wet Leg’s debut doesn’t just deliver on the potential of those promising early singles – this is a thematically rich, musically adventurous and endlessly repayable classic. Its best moments, Angelica, Too Late Now, I Don’t Wanna Go Out and Ur Mom, leave us giddily pondering where Wet Leg will go next. But right here, right now, this is the manifesto of a band ready to take their place as a generation’s new figureheads.
Wet Leg is out now.
The post Wet Leg – Wet Leg review: Believe the hype appeared first on Guitar.com | All Things Guitar.