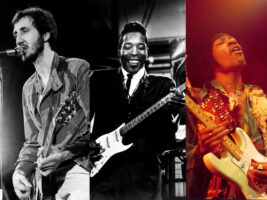 Roger Daltrey has discussed the origins of Jimi Hendrix’s rock theatrics, claiming that he stole the act from Who guitarist Pete Townshend, but that they both owe a lot to blues legend Buddy Guy.

READ MORE: Pete Townshend says The Beatles “copied” The Who for Sgt Pepper

In a new interview with The Coda Collection, Daltrey said: “you watch Buddy Guy in the early days and you suddenly realise – when you really look for the inventor of all that stuff, it was probably Buddy Guy. In fact, I would give it to Buddy Guy.”
“I’ve always stuck up for Pete [Townshend],” he continued, “saying, Jimi stole Pete’s stage act completely, which, incidentally, I think he did. But I’m sure Jimi had seen Buddy Guy previously, as I’m sure Pete had seen some clips of Buddy Guy and embellished it.”
“I take my hat off to Buddy Guy, he deserves the accolade. I just love him,” Daltrey added.
Elsewhere in the interview, Daltrey reacted to Paul McCartney calling The Rolling Stones a “blues cover band.” He didn’t entirely disagree, stating: “You can not take away the fact that Mick Jagger is still the number one rock ‘n’ roll showman upfront. But as a band, if you were outside a pub and you heard that music coming out of a pub some night, you’d think, ‘Well, that’s a mediocre pub band!’”
“No disrespect,” he added quickly.
You can see more about Daltrey’s Coda Collection interview here.
The post Roger Daltrey says Jimi Hendrix stole Pete Townshend’s act, but they both owe it to Buddy Guy appeared first on Guitar.com | All Things Guitar.