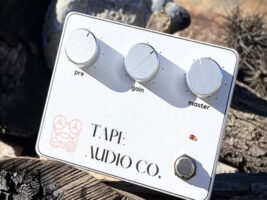 Effects pedal newcomer, Tape Audio, has launched its second pedal suitably named TWO. Following the success of first release ONE, a fuzz pedal, this new stomp box is for overdrive and distortion.

READ MORE: Gibson releases exclusive Les Paul Standards with Flamed AAA Tops – but you can’t see them before you buy

TWO combines both silicon and germanium circuits and comes with three dials to control gain, but no tone controls. Tape Audio say they used simple, discrete transistor gain topology in both sections of the circuit to achieve a dynamic and interesting drive pedal that covers a lot of ground.
TWO sets out to offer light colouring of your tone, medium grit and bite, and sharp distortion bordering on fuzz. The EQ is balanced, so despite having no tone controls, the three dials for gain are more than enough to hone in on your desired sound.
You can take a peek at it in action with the demo below:

The pedal has a simplistic design in a choice of black or white, with solid aluminium dials. For those looking to know the set up within, there are NOS Carbon Comp resistors, NOS Philips, Sprague, GE or similar capacitors, NOS Germanium transistor and diodes, with Switchcraft and Lumberg jacks.
With the gain all the way up, TWO brings crunchy, biting distortion with full force, and with only two pedals on offer, it looks as though Tape Audio could be earning themselves a respected place in the effects pedal market.
You can get your hands on TWO for just $199, and you can get 15% off if you purchase both ONE and TWO together. Find out more here.
The post Tape Audio launches new fuzz pedal with silicon and germanium circuits: TWO appeared first on Guitar.com | All Things Guitar.