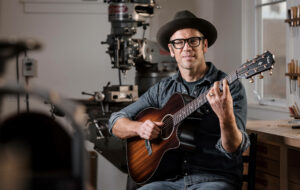 Taylor Made: Andy Powers on designing guitars for the next generation

Ad feature with Taylor Guitars
With recent data suggesting that there are 16 million more guitar players in North America today than there were prior to the pandemic, it’s clear that our beloved instrument is enjoying something of a moment. What’s also apparent is that playing behaviours have shifted too, with more and more guitarists spending the majority of their playing time in a seated position. Social media, meanwhile, has become for many the most viable concert stage. So what impact, if any, is this having on guitar design?
The desire to round over the hard edges of instruments in order to create more approachable guitars is something that we’ve discussed with Taylor’s Master Guitar Designer Andy Powers on numerous occasions – and long before Covid. “It’s actually a theme that was at the forefront of my mind when I was first working on what became the Academy Series guitars,” says Powers. “We launched those back in 2017. One of the central ideas behind that guitar was, if you can make the interaction between the player and the instrument a more comfortable one, the inevitable result is more playing, for longer periods. It’s easier and friendlier to pick up and, for a player who is first coming to the instrument, it’s not a turn-off.”

So much design is, of course, rooted in practicality. At Taylor, this was exemplified in late 2020 with the launch of the American Dream Series – guitars with streamlined appointments designed for uncertain times. “Our factories were shut down, ports were being shut down, a lot of sawyers were being forced to shut down, so it was about designing something new around the materials we had to work with,” Andy reveals. “It was literally like going to the pantry and going, ‘Ok, the kids need to eat dinner, let’s see what we’ve got!’ So I designed a guitar that would work well with those materials, and serve the needs of what a player was looking for right at that moment.
“It certainly didn’t feel like the right time for a lot of flash and extravagance and decoration on a guitar. What I really wanted was the utilitarian character of a good, functioning, working guitar. It’s like the cup of black coffee of guitars. Just put the coffee in the cup, I’m going to drink it that way and it’ll get the job done! In the end those guitars became some of my favourites. It feels like the field that you’re playing on is completely uncluttered. It’s wide open and it lets the musician go wherever they want to go.
The elegant simplicity of the American Dream Series was a result of the pandemic
“A lot of players, they’ll pick up a very elaborate guitar – something with lots of beautiful abalone or shell inlay work, a gorgeous polished finish, the most exotic woods – and it feels like they need to play in a similarly flamboyant, regal, majestic sort of way, to match the instrument. With guitars like the GT or the American Dream Series, the simplicity of that design allows the musician to go wherever they want to go. They can play whatever they want to play on it. It might be fancy, it might be complex music… it might be the simplest three chords you could strum just to accompany some voices around a campfire. Any of it is ok.”
If you look at the history of our instrument, Powers acknowledges that the designs with the most longevity are often some of the simplest. “It’s not something I could prove,” says Andy, “but I suspect that, when you have an instrument like that, that’s full of humility and grace, that allows a wider variety of players than ever to approach it – those end up being the instruments that have enduring success. They are musically viable today, tomorrow, 10 years from now, 100 years from now. Because they don’t exclude any playing style, and they don’t exclude any player. Ultimately my measurement for the success and the quality of an instrument is, ‘Is it enjoyable to play? Is it fun? Is it inspiring? Is it creative?’ If it’s not, it’s not a good guitar, in my opinion.”
Visit taylorguitars.com for the latest information on the brand.


The post Taylor Made: Andy Powers on designing guitars for the next generation appeared first on Guitar.com | All Things Guitar.