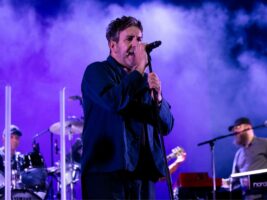 Terry Hall, frontman for The Specials, has died aged 63

This morning (20 December), it was announced that Terry Hall, frontman for the 1980s ska band The Specials, passed away aged 63.
Best known for his socially conscious lyrics in tracks that came to dominate the 80s, Terry Hall was regarded as a pioneer for the ska genre and changed the musical landscape with tracks including Ghost Town and Gangsters.
His death was announced today by the band, with the surviving members taking to Twitter to share their devastation at the loss.
“It is with great sadness that we announce the passing, following a brief illness, of Terry, our beautiful friend, brother and one of the most brilliant singers, songwriters and lyricists this country has ever produced,” they wrote in the statement.
“His music and his performances encapsulated the very essence of life… the joy, the pain, the humour, the fight for justice, but mostly the love. He will be deeply missed by all who knew and loved him and leaves behind the gift of his remarkable music and profound humanity.”

It is with great sadness that we announce the passing, following a brief illness, of Terry, our beautiful friend, brother and one of the most brilliant singers, songwriters and lyricists this country has ever produced. (1/4) pic.twitter.com/qJHsI1oTwp
— The Specials (@thespecials) December 19, 2022

The band also requested that fans “respect the family’s privacy at this very sad time”. As of yet, no further details on the cause of death have been announced.
The Specials, originally named the Automatics, was formed by Jerry Dammers, Lynval Golding and Horace Panter in Coventry in 1977.
Hall, as well as John Bradbury, Roddy Byers and Neville Staple joined the lineup the following year.
Their politically-charge sound soon led to them being recognised as one of the first ska bands, and popular tracks, Too Much Two Young and Ghost Town, both reached the number-one spot throughout the early 1980s.
The band came to an end in 1981, with the frontman later forming the band Fun Boy Three with fellow Specials members, Staple and Golding.
In a new statement following Hall’s death, former bandmate Neville Staple shared that he was “deeply saddened” about the news, and explained that he had recently planned a new musical project with Hall, which was due to be initiated next year.

The post Terry Hall, frontman for The Specials, has died aged 63 appeared first on Guitar.com | All Things Guitar.