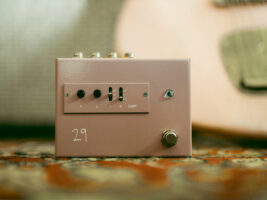 When your guitar signal travels through true-bypass pedals, splitters and metres of cables, don’t be surprised if your tone loses its vigour on the way. The OAMP from 29 Pedals is an output driver that conditions and sweetens your signal to make up for that loss.

Designed to sit at the end of your pedal board, the OAMP supplies 29dB of gain that can be shaped with a selection of two onboard filters as well as a presence control. These tonal shifts are subtle, in order to preserve your guitar’s authentic sound.
Meanwhile, the OAMP’s built-in effects loop lets you assemble creative routing options on your board, allowing you to switch between pedal chains on the fly.
The effects loop is also particularly useful if you’re running a vintage germanium fuzz, which usually likes to be first in your chain, on your pedalboard. If there’s a long cable between your guitar and ‘board, and you’re planning on using the OAMP to revitalise your tone, the effects loop effectively lets you switch between using the OAMP or fuzz as a boost.
The OAMP is also equipped with the 29 Pedals Whatever power supply, which delivers 7.5v to 35v of AC or DC power in either polarity with no change in tone.
Watch a demo of the 29 Pedals OAMP from collector//emitter below:

The OAMP is priced at $300.
Learn more at believableaudio.com
The post The 29 Pedals OAMP is an output driver that preserves and sweetens your guitar’s true signal appeared first on Guitar.com | All Things Guitar.