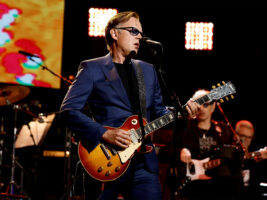 In his appearance on the Murphy Lab Artist Series, Bonamassa weighed in on Les Paul, SG and ES-335 models. The vintage guitar aficionado also talked about the first time he got to play a ‘59 Les Paul and discusses some of the modifications he’s seen on vintage Les Pauls.
The series lets artists test drive Gibson’s new Murphy Lab-aged guitars. Watch it below:

The Murphy Lab instruments launched earlier this year and offered fans a chance to get their hands on vintage-accurate Gibsons with a variety of premium ageing options.
Earlier this year, Guitar.com got hands-on with a pair of Murphy Lab ‘59 Les Pauls that left us greatly impressed. In our review of the guitars, we said: “Both of these guitars will live long in our memory and we can’t wait to see some of the other models that are getting the Murphy Lab treatment […] If you’ve always dreamed of owning a vintage Les Paul replica that looks and feels like the real thing, the wait could be over.”
However, certain Murphy Lab models have drawn criticism for their alleged finish issues – users have reported cracking or chipping on the lacquer finishes.
When Guitar.com spoke to Gibson’s Senior Director of Product Development Mat Koehler about these reported issues, he clarified: “It is especially important that our dealers and fans fully acclimate their instrument in its case when changing climates/temperatures… I would say at least five hours, minimum. Just like you would with vintage 1950s instruments.”
“I used to deal vintage guitars so I’ve seen it time and time again,” Koehler continued. “I think the majority of cases are just customers not quite accustomed to the behaviour of the vintage lacquer formula.
“We’ve got an original Burst and an SG in our Gibson Vault that have some flaking and chipping over the aniline dye as well… but the average buyer is not going to have a lot to compare. In any case, we are making the acclimation notice more prominent in a few different ways and educating our dealers and fans as much as possible.”
The post Watch: Joe Bonamassa weighs in on Gibson’s Murphy Lab Les Paul, SG and ES-335 appeared first on Guitar.com | All Things Guitar.