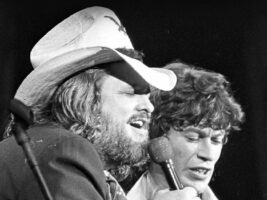 Rockabilly legend Ronnie Hawkins of The Hawks, and one-time leader of The Band, has passed away at 87.
According to CBC, Hawkins died early in the morning on 29 June after a long battle with an unspecified illness. His wife Wanda told the outlet that “He went peacefully and he looked as handsome as ever,” in a phone interview.
Born in Huntsville, Arkansas in 1935, Hawkins moved to Canada following a successful run touring Ontario in 1958, and was featured in a documentary for CBC as a resident of Canada just nine years later. He would continue performing, though Hawkins are more famously known for his stage presence and repertoire of covers as The Hawks never charted higher than 26 in the US charts.
Members of The Hawks besides Hawkins himself over the years included names like Roy Buchanan, Beverly D’Angelo, David Foster, Lawrence Gowan and Pat Travers among the ranks of those who shared the stage with the veteran singer.
Hawkins famously played a mentor figure role to Rick Danko, Levon Helm, Garth Hudson, Richard Manuel and Robbie Robertson of The Band in their pre-fame days as members The Hawks before the band left the newly-married Hawkins and moved to the US to eventually find fame after a spell backing Bob Dylan.
Robertson even thanked Hawkins for “teaching us the ‘code of the road,’” in his speech at the band’s introduction to the Rock and Roll Hall of Fame in 1994. The guitarist posted a tribute to Hawkins in the wake of his passing, calling him “a great artist, a tremendous performer and band-leader” who possessed a “style of humour unequalled.

Hawkins was a prominent presence in Martin Scorsese’s 1978 rockumentary The Last Waltz, which captured The Band’s 1976 farewell concert in San Francisco’s Winterland Ballroom. Hawkins travelled to the city to join The Band for their swansong featuring the original lineup of members.
He was entered into Canada’s Walk of Fame in 2002 after a successful quadruple-bypass surgery.
The post The Band’s pre-fame leader Ronnie Hawkins has died at 87 appeared first on Guitar.com | All Things Guitar.