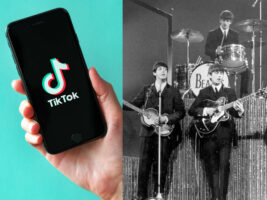 The Beatles now have an official TikTok account, and have made some of their tracks available for use on the platform. The move follows all four members of the band receiving an official, verified account on the platform, and comes ahead of Peter Jackson’s Beatles documentary Get Back.

READ MORE: Watch: The first trailer for The Beatles: Get Back docuseries has landed

The official Beatles TikTok only features a handful of videos, including some teasers for Get Back and the upcoming reissue of Let It Be. One also encourages fans to explore the band’s number-one hits. These hits make up the vast majority of the Beatles songs to be found on the platform – 36 in total are available, including all of Let It Be and any number-one hit the band had in the US or UK.
These songs are available for other users to use as soundtracks to their own content, through TikTok’s integrated Songs and Sounds features.
The move comes as the platform and the internet in general marks ‘#Rocktober,’ a loosely defined celebration of rock music in all its forms that takes place across the month of October.
The move also follows the first major guitar brand with a TikTok account: last month, Fender opened up @fender, coinciding with the launch of the new Player Plus guitars. TikTok’s popularity with young music fans has seen it shape trends in the industry big and small: some of 2021’s biggest pop superstars got their start on the platform, while it’s also home to a thriving alternative scene.
See the Beatles’ official account over at tiktok.com.
The post The Beatles join TikTok, make 36 songs available as soundtracks appeared first on Guitar.com | All Things Guitar.