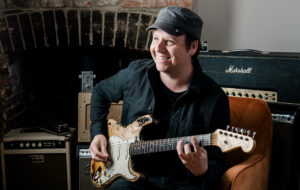 The Collection: Scott McKeon on his 1962 Fender Strat and playing with Eric Clapton

Produced by respected Oasis and Black Crowes collaborator Paul Stacey, Scott McKeon’s 2021 album New Morning is a bona fide guitar record. For fans of blues, rock and even jazz, there’s plenty to dig into as the album’s nine tracks bristle with a live-band feel and no shortage of passion, dynamics or classic guitar tones.

READ MORE: “Making the album was a way through the pandemic”: Johnny Flynn on new LP Lost In The Cedar Wood

Swampy blues licks and emotive slide sit alongside sparking 12-string textures and moody baritone riffs. And while extended solos and band jams evoke McKeon’s 1960s guitar heroes in intent, when delivered with as fiery an intensity as they are here, he is clearly still pushing the blues-guitar genre forward.
A child guitar prodigy, inspired by his dad’s love of blues, soul and rock music, Scott took up the instrument at the age of just four (check out @scottmckeon33 on Instagram to see a recently posted clip of his seven-year-old self ripping out some lead guitar on a TV show), and by the age of 13 he was gigging and fronting his own band.

Other guitars used were Scott’s stunning Custom Shop Pink Sparkle Telecaster Thinline with a TV Jones pickup in the neck, while for chunkier tones he utilised Paul’s 1968 Les Paul Custom and a Terry Morgan LP replica. “That’s and incredible Les Paul, the Terry Morgan,” notes Scott. “Jimmy Page used it when he played with The Black Crowes at Shepherds Bush Empire a few years ago.”
Wall of sound
When it came to amps, Stacey and McKeon set up “a wall of really loud amps and cabs in another room”. These were mic’d and then blended to taste at mixdown to get the required tone. “We had my ’64 Vibroverb,” says Scott, “a 68 Deluxe, a bunch of Two-Rock heads and cabs, my 1974 Marshall JMP, a small 1950s Gibson Les Paul Jr amp and lots of pedals!”
This Gibson Hummingbird is a go-to acoustic
Indeed, Scott is something of a pedal connoisseur, having designed and released his own SM Fuzz several years ago. “I had the prototype of the fuzz I’d put together on my board at the Royal Albert Hall gig back in 2009, supporting Joe Bonamassa,” he says. “Joe came over and asked what it was and could I make him one!”
Interest from other players and friends soon led to Scott release it. “Initial interest was good and we sold loads but then interest died out a bit so we stopped doing them. A couple of years back, a friend pointed out to me that the originals were going for crazy money on eBay. I thought we’d better start doing them again, and they’ve become really popular again with players like Gary Clark Jr, Doyle Bramhall II and James Bay, which is great”
Players such as Gary Clark Jr are fans of the SM Fuzz
Scott will soon release a new pedal, the SM Octave Fuzz. “This is all over the new album too,” he notes with pride, and proud he should be. Back in the game with the best album of his career under his belt and ready once again to perform his own music in front of live audiences, there’s plenty more to come from Scott McKeon.
Head over to scottmckeon.co.uk for upcoming dates and visit smfuzz.com for more on Scott’s pedals.
The post The Collection: Scott McKeon on his 1962 Fender Strat and playing with Eric Clapton appeared first on Guitar.com | All Things Guitar.