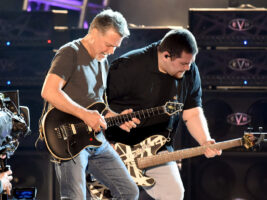 Wolfgang Van Halen has reflected on his father Eddie’s death, opening up about how his passing “still doesn’t feel real.”

Yesterday (12 August) Wolfgang reflected on his father’s death in an Instagram post, writing: “I’ve had so many dreams lately where Pop and I are just doing normal things and then I realise it’s a dream, stop whatever I’m doing and hug him for as long as I can until I wake up,”
“I miss the fuck out of him. I can’t believe he’s not here anymore. Still doesn’t feel real. I’m doing my best, Pop.”

Eddie Van Halen died last October, following a lengthy battle with cancer. His death was followed by an outpouring of tributes, which included the early release of Distance, a song written by Wolfgang in honour of his father.
“Distance is a song that was initially written for the debut album, but was going to be held for a later time,” Wolfgang explained upon its release. “I never anticipated Distance would be the first song of mine that people would hear, but I also thought my father would be here to celebrate its release along with me. This is for him.”
“As my pop continued to struggle with various health issues, I was imagining what my life would be like without him and how terribly I’d miss him,” he continued. “While this song is incredibly personal, I think anyone can relate to the idea of having a profound loss in their own life.”
Mammoth WVH, Wolfgang’s solo project, released their debut album in June of this year, and are currently on tour with Guns N’ Roses.
The post Wolfgang Van Halen says Eddie Van Halen’s death “still doesn’t feel real” appeared first on Guitar.com | All Things Guitar.