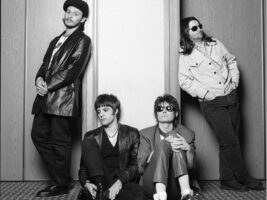 The most groundbreaking moments in music have rarely stemmed from those who’ve rigidly stuck to the blueprints for commercial success. It’s those artists who’ve made tough choices and hard-swerves into uncharted territory, that have made the most important dents.

Few records have impacted listener consciousness quite like the Manic Street Preachers’ third LP, The Holy Bible. A marked departure from the radio-friendly sheen of the preceding Gold Against The Soul, here was a document less preoccupied with garnering radio airplay than it was with ripping apart the foundations of the political systems that shaped an expanding, globalised world. Its broader conceit convincingly predicted the western world’s slide into a barbarous, fascistic future, while its citizens stand idly by, opiated by consumerism.
In parallel to its bleak broader concerns, The Holy Bible also serves as an act of brutal self-examination, with the band’s mercurial lyricist and chief aesthete Richey Edwards, regularly directing his wrath at himself throughout the album’s run-time, deconstructing his mental and physical health, most pointedly on the heart-rending 4st 7lb – a song informed by his own battles with anorexia.
Charged with injecting Edwards’ disordered lyrical outpourings into suitably boiling arrangements, the Preachers’ central guitarist, James Dean Bradfield was the album’s musical lynchpin, and crafter of its many blistering guitar sounds. He bound Edwards’s often stream-of-consciousness tirades with a harsher edged gothic veneer – a far cry from the bright day-glo glam of the preceding album.
In a cramped Cardiff studio, Bradfield carefully sequenced complex broadsides of intimidating, sledgehammer power chords, coupled with melodic, serpentine leads and petrifying squalls of tension. As Bradfield said to journalist Ned Raggett at the time (later published by The Quietus) “We did it really quick. It’s more direct. I don’t think it makes concessions to the listener at all. It’s really honest, and it just goes for it.”
Sadly, it’s a record that’s often evaluated in the context of what happened next, with Richey Edwards’ tragic disappearance (and the eventual assumption of death) overshadowing many perceptions. Assessed on a purely musical level, The Holy Bible still stands as the Manic Street Preachers’ most blazingly intense, harrowingly dark and profoundly compelling work.

Lust, vice and sin
Though Edwards was its prime instigator, the collective agreement to pursue a darker direction had stemmed from a shared sense that the band was at an impasse, following the muted reception that met their previous record. “There was a realisation that we hadn’t got as big as we thought we would have.” Manics’ bassist and additional lyricist Nicky Wire reflected, back in a 2014 interview with NME, who also admitted that the switch was spurred by the band wanting to be ‘100 per cent truer to ourselves’. James Dean Bradfield, too was conscious of the band beginning to slide into a predictably ‘rockist’ niche.
In pursuit of this truer sound, the band resisted label pressure to record in a luxurious studio in sun-drenched Barbados and instead decamped to Cardiff’s minuscule Sound Space Studios. It was here the four set to work on concocting the more upfront sound which was more in-keeping with their formative influences, such as Joy Division, The Clash and Magazine.
Though friend and engineer Alex Silva was on hand to capture and engineer the four, no overall producer was designated. Silva told the R*E*P*E*A*T Fanzine that “I think at the time, the band had an ideal, James said that ‘No albums have been produced since Led Zeppelin III’. So in that case, they felt there was no need for a producer as such – maybe because the term ‘producer’ carried too much weight for them. I’m fine with my credit, I just recorded what was there.” Another guiding hand who would enter the frame later in the process came in the shape of mixer Mark Freeegard, who told the same fanzine that the recording choice to initially capture the album on 1-inch tape factored into the demo-like sound the band were striving for.
For The Holy Bible sessions, Bradfield minimised the number of guitars, and stuck largely to his trusty white Gibson Les Paul; a staple instrument that he’d purchased from a Denmark Street guitar shop back in the early 1990s. It’s a guitar that has appeared in some form on every MSP record. “It is my most valuable six-stringed friend” he lovingly expressed to Guitarist in 2014. Bradfield also used a buttercream Fender Jazzmaster for a handful of other songs, including the tonal switch of the glistening open-G-forged This Is Yesterday – a gorgeous composition that serves as the record’s brightest moment, a lone glimmer of candlelight in the stygian abyss.
James used both a Marshall amp through a 4×12 cab, as well as a Vox AC30 throughout the recording, with the occasional use of Soldano amp, output through the same Marshall cab. Though this was the core of the rigid and deliberately minimal set-up, Bradfield’s Fender Twin Reverb was occasionally wheeled into the studio to wrangle a few more interesting tones. Pedals were also kept at a relative minimum, though an unmistakable BOSS Hyper-Fuzz (rumoured to have actually been owned by Richey Edwards) is regularly deployed. A CH-1 Super Chorus (with a super fast oscillation) augments the sound of Faster’s opening squeal and is used in more slowly oscillated form for the racing barrage of Of Walking Abortion’s intro. Other effects were achieved with rack mounted units, such as the Marshall Time Modulator.
Though Edwards shaped the record from a conceptual standpoint, he never actually recorded any guitar parts himself, entrusting the more capable Bradfield to meticulously lay down each part. On the resulting tour however, Richey was known for sporting an elegant Thinline Fender Telecaster (later to be used by Bradfield) as well as his own Les Paul Standard.

For more reviews, click here.
The post The Genius Of… The Holy Bible by Manic Street Preachers appeared first on Guitar.com | All Things Guitar.