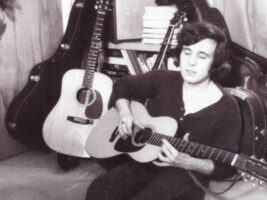 The acoustic guitar that music legend Don McLean used to compose and record the song Vincent is set to go under the hammer via Julien’s Auctions.

Aside from its involvement in the Van Gogh tribute, the 1969 Martin 00-21 acoustic was also used by McLean to record a handful of other songs — including Til Tomorrow, Winterwood, Empty Chairs, Sister Fatima, and The Grave — in his 1971 seminal album, American Pie.
That said, this is not the guitar McLean used on the song American Pie; that job was completed on a Martin D-28 instead.
Featuring a solid spruce top and rosewood back, sides and bridge, the guitar sports a 12-fret mahogany neck with rosewood fingerboard, dot markers, and a slotted headstock with upgraded Schaller strip tuners. Julien’s Auctions also notes that the instrument is in “good condition with scrapes and scratches and signs of a re-glued bridge and the slightest belly”.
Image: Julien’s Auctions
A young McLean had reportedly purchased two Martin 00-21s following an encounter with blues musician Josh White. He then retrofitted the one that’s going up for auction with Schaller tuners and sold the other shortly after.
The guitar will come with a faux snakeskin hard case, along with pages from American Troubadour (McLean’s autobiography) depicting him with the instrument.
As a singer-songwriter with his roots in folk, McLean often spoke about the importance of the guitar in his creative process. He once said in a conversation with Norm of Norman’s Rare Guitars (Per Julien’s) , “The guitar has been the way I’ve written a lot of songs, like a song like And I Love You So. And even Vincent was really off the guitar.”
With a starting bid of $50,000, the Martin 00-21 is estimated to fetch between $200,000 to $400,000. Aside from the guitar, over 300 items from McLean’s personal collection will also be going up for sale from 11 November to 13 November online, and at the Hard Rock Cafe in New York.
Check out the full listing at juliensauctions.com
The post The guitar Don McLean used to write and record Vincent is going up for auction appeared first on Guitar.com | All Things Guitar.