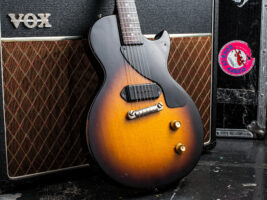 “I’ve heard a million times that people believe single-pickup guitars are too limiting.” So says Jared James Nichols, the blues phenom whose work underlines how wrong those people might be. “A ton of folks think more is always better,” he adds, “but in reality, these guitars push you to be creative.”

READ MORE: 5 pieces of iconic guitar gear that were lost… and are still missing today

It’s impossible to talk about one-pickup guitars and not mention the effect that Edward Van Halen had on the notion that one pickup is somehow limiting. Many more players since have discovered the attraction of a solitary pickup, from Jack White’s influential slides on an old Kay to Fredrik Thordendal’s massive eight-string efforts on a signature Ibanez.
The first guitar Jared James Nichols ever picked up was a Les Paul Junior. “When I started to woodshed and find my musical path, I kept going back to that feel and simplicity of the single pickup,” he says. “It honestly spoke to me and inspired me to play.” Jared notes that this simplicity in single-pickup electronics forces you to coax out all the tones in your head with the way you attack the instrument.
“Between where you pick on the string, your dynamics, and how to manipulate the simple volume and tone controls, it forces you to focus on the biggest part of all of this – connecting with the instrument. My biggest guitar hero is Leslie West of Mountain. His approach, tone, and physicality to the guitar inspired me beyond belief. He showed me how far you can go by just being inspired.”
Jared James Nichols has long been a fan of single-pickup guitars but he’s a recent convert to the joys of neck pickups
Jared’s signature single-pickup Epiphone Les Paul Custom, plus his ’56 Junior and his two Les Paul Models, Ole Red (an oversprayed late-’53) and Dorothy (early ’52), underline his love for P-90s. “Nowadays,” he admits, “I have come around to a great neck pickup – my two original Les Pauls both have insane neck-pickup tones. So it’s a fun dynamic now, switching between single-pickup guitars and my originals. I get inspired in a different way.”
How about that idea we began with, that single-pickup guitars are just too limiting? “They force you to use a different side of your musicality,” Jared argues. “You will sound like you. It’s fun to see people try out my signature models – no matter what, everyone sounds different. They sound like themselves. I guarantee you’ll be blown away by the results of a great single-pickup guitar through a loud tube amp. For me, it’s one of the best sounds in the world.”
For more features, click here.
The post The history of single-pickup guitars appeared first on Guitar.com | All Things Guitar.