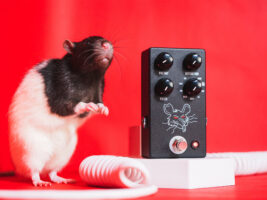 JHS Pedals has released the PackRat distortion pedal, bringing nine different types of Rat pedals together in a single enclosure.

The pedal is the latest in the JHS Multi-Mode series, which salutes classic effects – and their numerous variants – that have stood the test of time. Similar to how the Bonsai and Muffuletta honoured the Ibanez TubeScreamer and Big Muff, the PackRat pays tribute to four decades of the iconic ProCo Rat distortion pedal.
The completely analogue offering gives players access to nine “hard-to-find” versions of the effect, which JHS says would easily amount to $4,000 in value on the used market.
These modes include a “perfect recreation” of the OG big box Rat from the late 70s, as well as takes on the White Face Rat and Turbo Rat from the 1980s, the Brat from the 1990s, and You Dirty Rat of the 2000s.
Renditions of important Rat variants also make it onto the pedal, including the LA Metal distortion from Ibanez, Landgraff Mo-D and Caroline Wave Cannon. The final mode of the pedal is reserved for the JHS mod of the Rat circuit.
The nine pedals recreated in the JHS Pack Rat / Image: JHS
Aside from the nine-mode selector, the pedal keeps things simple (and authentic) with its control section; Rat users will feel right at home with the familiar volume, tone and filter knobs.
The JHS PackRat is available now for $249.
Learn more at jhspedals.info
The post The JHS PackRat has nine “hard-to-find” versions of the Rat distortion in one box appeared first on Guitar.com | All Things Guitar.