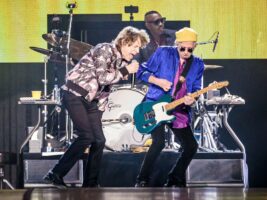 The Rolling Stones on how The Beatles’ image was contrived to make them more digestible to the public: “They were exactly the same as we were”

In a BBC documentary released last week, The Rolling Stones members Mick Jagger and Keith Richards opened up about the controversial image that has followed them throughout their career. Comparing themselves to The Beatles, the band also say that despite their contrasting images, the behaviour of both bands was the same behind the scenes.

READ MORE: Keith Richards Speaks Out About His Drug Use: “It’s A Rough Old World And Sometimes You Need Something To Blank It Out. And It Probably Ain’t Worth The Ride”

In the debut episode of the series My Life As A Rolling Stone, which launched on BBC iPlayer last weekend (2 July), the frontman discussed the rebellious image that the band became renowned for following their formation in 1962.
Describing their drug-related altercations with the police throughout the 1960s and 1970s, the members explain how it wasn’t uncommon for The Beatles to act in a similar way, albeit behind the scenes.
Both Richards and Jagger explain how their image came as a result of the band’s manager at the time, Andrew Loog Oldham:
“I think that Andrew very much liked to contrive the danger because he saw that, very cleverly, as a foil for The Beatles,” Jagger states in the documentary. “Brian Epstein [The Beatles’ manager] had sold them as these lovable scamps […] so Andrew wanted us to be more nasty and more dirty and [with] more of an edge.”
Keith Richards also contributes to the discussion, explaining how although they had a more respectable image in front of the cameras, when away from the public eye The Beatles’ behaviour was similar to that of the Rolling Stones:
“They got cleaned up by their manager to make them more palatable to the public,” he explains. “Otherwise, they were exactly the same as we were… Filthy swine [laughs]”.
Elsewhere in the documentary, Jagger also confesses that he felt his career was over when he was arrested in 1967, stating that, for a time, the members were seen as “drug addicts” more than as musicians:
“There was a lot of drugs,” he explains. “When you’re on acid, being busted, it’s very odd. […] My first reaction was ‘Oh my god, what am I going to do?’ you know, and, ‘What does my mum think?’”
“They [said I] could go to prison for five years. You’ve now been derailed from your amazing life of a pop singer – it takes the emphasis off your career and achievements. It makes you a group of drug addicts rather than a talented group of musicians.”
Keith Richards expands on how the incident increased his disdain towards the police, who, at the time, he believed had an agenda against him:
“Unnecessary authority. I always felt that they were picking on me, [so] of course, that only reinforced my wariness of authority… I still carry a chip [on my shoulder].” he says. “I could use a joint right now.”
All episodes of My Life As A Rolling Stone are available now on BBC iPlayer.
The post The Rolling Stones on how The Beatles’ image was contrived to make them more digestible to the public: “They were exactly the same as we were” appeared first on Guitar.com | All Things Guitar.