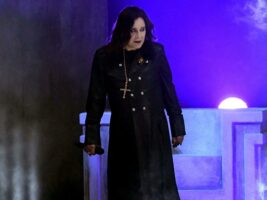 Ex-Black Sabbath Drummer recalls being warned about “crazy” Ozzy Osbourne before he joined the band: “Ozzy’s crazy, but he’s a lot of fun”

Participating with over thirty bands throughout the duration of his career, including playing alongside John Lennon while he was still a teen, renowned drummer Vinny Appice has spoken out on his reluctance to play alongside Black Sabbath frontman, Ozzy Osbourne.

READ MORE: The Rolling Stones On How The Beatles’ Image Was Contrived To Make Them More Digestible To The Public: “They Were Exactly The Same As We Were”

The drummer, now most widely recognised for his work with Dio-era Black Sabbath, has revealed that he was initially approached to work with Ozzy Osbourne in 1980 but turned the opportunity down because of the rumours that circulated around the musician.
Speaking as part of the Talkin’ Rock show on 101WRIF last week (June 29), Appice described how he was given the opportunity to work alongside the frontman as part of a side project, but warned by his brother to turn down the offer as Osbourne had already built a reputation for being “pretty crazy”.
“Before I joined Black Sabbath, this was in 1980, the middle of the summer – I got a call from Ozzy’s camp. They wanted to fly me to England because they were going to put a band together around Ozzy. I’d fly out to London, meet Ozzy, hang out and see if we get along,” he describes. “So, I talked to my brother Carmine, who knows Ozzy, and he said he was pretty crazy. And I was really, really, young, so I didn’t go for it. I said, ‘I can’t do it.’”
Appice goes on the describe how, despite turning down the opportunity to work alongside the infamous vocalist, he ultimately ended up joining Black Sabbath a short time later following Bill Ward’s departure:
“A month or two later, I got a call from Sabbath, and they’re in California, LA; that’s where I live. I met Tony Iommi, we got along great and next thing you know he invites me to rehearsal and then I’m in the band,” he reminisces. “That was quite a year. Ozzy Osbourne calls for a project and when that didn’t happen. And then Sabbath calls… that’s how crazy the 80s were.”
In addition to describing the circumstances in which he joined Black Sabbath, the musician also recalls feeling immense pressure when he was a part of the band. Explaining how he felt rushed to learn all of their tracks before his live debut, Appice says:
“We only had four days, because Bill [Ward] left. And the next gig was in Hawaii– a 30,000-seater stadium,” he describes. “Everybody liked me. They were so happy [and] went to the pub, to celebrate, and I’m over there, I got to learn 13, 14 songs, help! […] I had a whole book to get me through the set. It was so much pressure for me, you know, that I had to learn this stuff.”
Spending the majority of his time in the band playing alongside Ronnie James Dio, Appice did eventually come to share a stage with Osbourne, over a decade since he first received the offer. Stepping in for Bill Ward for a few shows during the late 1990s, Appice confirmed that his brother’s comments about The Prince of Darkness were true, but that he enjoyed working with him regardless:
“Ozzy’s crazy, but he’s a lot of fun. He’s a happy guy. He loves what he does. I played with him later on, with the original Sabbath. He was cleaned up some and he was just having fun.”
Find the full interview with Vinny Appice on the Talkin’ Rock show.
The post Ex-Black Sabbath Drummer recalls being warned about “crazy” Ozzy Osbourne before he joined the band: “Ozzy’s crazy, but he’s a lot of fun” appeared first on Guitar.com | All Things Guitar.