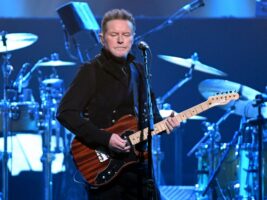 Three people were charged Tuesday in an alleged conspiracy to sell stolen manuscripts to the iconic Eagles album Hotel California.

According to the district attorney’s office in Manhattan, Glenn Horowitz, Craig Inciardi and Edward Kosinski have been indicted in a conspiracy involving the possession of more than 100 pages of Don Henley’s handwritten notes and lyrics for the Eagles album Hotel California.
The stolen papers include lyrics to the songs Hotel California, Life in the Fast Lane and New Kid in Town, and are collectively valued at over $1 million.
Prosecutors say that the defendants, despite knowing that the materials were stolen, attempted to sell the manuscripts, manufactured false provenance, and lied to auction houses, potential buyers, and law enforcement about the origin of the material.
Per court documents, the manuscript was stolen by an author who was hired to write a biography of the band in the late 70s. The papers were eventually sold to Horowitz in 2005, who in turn sold them to Inciardi and Kosinski.
Between 2012 and 2017, the defendants allegedly tried to get Henley to buy back the stolen manuscripts, while simultaneously trying to sell them to other potential buyers through Christie’s and Sotheby’s auction houses.
Henley filed police reports and demanded the return of the manuscripts when he learned of the attempted sale, but “rather than making any effort to ensure they actually had rightful ownership, the defendants responded by engaging in a years-long campaign to prevent Henley from recovering the manuscripts,” said the release from the DA.
Eventually in 2016, authorities via a series of search warrants retrieved the stolen materials from Sotheby’s and from Kosinski’s New Jersey home, including 84 pages to songs from the album Hotel California
Henley’s manager, Irving Azoff, said in a statement, “We are thankful to New York County District Attorney Alvin Bragg and his staff for pursuing this case and have faith that justice will be served. This action exposes the truth about music memorabilia sales of highly personal, stolen items hidden behind a facade of legitimacy.”
“No one has the right to sell illegally obtained property or profit from the outright theft of irreplaceable pieces of musical history. These handwritten lyrics are an integral part of the legacy Don Henley has created over the course of his 50-plus-year career. We look forward to the return of Don’s property, for him and his family to enjoy and preserve for posterity.”
The post Trio who tried to sell stolen Eagles manuscript charged in court appeared first on Guitar.com | All Things Guitar.