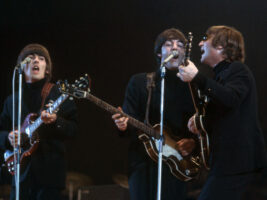 Rare photos of the Beatles have been freshly unearthed, showing the band in their early days performing at Liverpool’s Cavern Club a year before dropping their debut single.

The images were shared by the BBC earlier today (3 October) and are said to have been taken in July 1961, roughly a year before Ringo Starr joined the band and the release of Love Me Do.
1961 would make Paul McCartney and John Lennon 19, and George Harrison just 18. We also get (sort of) a glimpse of drummer Pete Best, who is unfortunately obscured in both shots, first by Lennon’s headstock and later by McCartney).

“No other photos show them dressed this way.”
Posted by BBC News on Monday, October 3, 2022

The performance took place at the now-famed Cavern Club in the band’s hometown of Liverpool and were said to have been taken after the band’s return from Hamburg.
Historian Mark Lewisohn, speaking to BBC about the images, described the members as “whippet-thin under-nourished lads”, later stating that it was the extensive tour of Germany that led to their dishevelled appearance.
“So slender has this marathon made them, it’s as if their heads and bodies are stranger,” he stated. “A look emphasised by the unusual clothes – leather trousers and cotton tops. No other photos show them dressed this way.”
Lewisohn, who has penned numerous books on the Fab Four, added that the images were taken shortly before the band acquired their now-signature hairdos and met the producer which would take them to worldwide success.
“Three months from here, John and Paul went to Paris and returned with what became known as ‘The Beatle haircut’,” Lewisohn said. “Days later, Brian Epstein saw The Beatles in the Cavern, offered to become their manager and set them on a course that changed our world.”
The post Unearthed 1961 pictures show the Beatles before Love Me Do (and mop-tops) appeared first on Guitar.com | All Things Guitar.