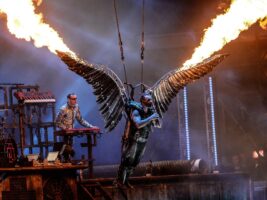 READ MORE: “It made us a better band”: Dropkick Murphys’ Ken Casey on going acoustic for an album of unpublished Woody Guthrie songs

IQ reports that the recent court order is “based on the consumer protection regulations that were newly defined in May 2022.” According to the restraining order, only one platform, Eventim, will be permitted to sell Rammstein tickets moving forward.
The attendee’s full name must also be displayed on their tickets, and proof of identification will be needed to be admitted into the shows. While ticket resale will be possible, it can only be done through the Eventim-distributed website fanSALE after 1 December, 2022.
Secondary ticketing websites like Viagogo have long been connected to scalping, with tickets often being sold at massively inflated rates to desperate fans.
“Buyers often do not realise that they are not buying their tickets from the organiser but on the secondary ticket market,” said lawyer Sebastian Ott of the court’s decision.
“The legislature has recognised this deficiency and acted. We are pleased that the district court of Hamburg shares our opinion and consistently prohibits violations of the new law.”
This is the second time the Hamburg Regional Court has legally prohibited Viagogo from reselling Rammstein tickets – a similar injunction was filed against the Switzerland-based company back in 2018.
Currently wrapping up their North American shows, Rammstein will kick off their European tour in late May next year. You can get your tickets here.