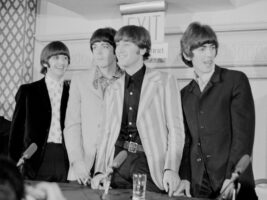 Previously unseen footage of the Beatles has been released, over half a century since it was first filmed – showing the band performing during their sole visit to Japan in 1966.

Until now, most videos of the band’s 1966 tour of Japan were inaccessible to the public. However, following years of prolonged court battles, the footage has finally been unveiled, showing the rock icons performing to an ecstatic crowd during the tour.
The silent, thirty-five-minute-long video not only shows the band performing on stage during their time in Tokyo, but also depicts the musicians descending from the plane wearing their matching kimonos and the behind-the-scenes police operations.
While Beatles fans will rejoice to finally see new snippets from the 1966 performance, the video does have one noticeable difference from all other footage: everyone, barring the four members of the band, has their face pixelated.
Done due to issues of privacy, this was a feature that ‘freedom-of-information’ advocates initially challenged – bringing the decision to Japan’s Supreme Court and stating that the footage was a “historical document” which should be available to the public without censoring. However, the request was rejected in 2018, meaning the videos have only just become available to the public as they underwent four years of pixelation work.
The performance, which took place at the Budokan arena in Tokyo, was one of just five live shows the band ever played in the country. Recorded by the police as a security measure, the videos also show both legions of devoted fans as well as crowds of conservative protestors.
Find a snippet of the footage below.

In other news regarding the Beatles, it was announced earlier today that two previously unseen photographs of the band have been unearthed. The images show the band performing in the now-iconic Cavern Club in 1961 – a year before the release of their debut single, Love Me Do.
The post Watch: Previously unseen footage of the Beatles released following censorship lawsuit appeared first on Guitar.com | All Things Guitar.