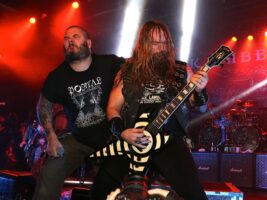 READ MORE: (What’s left of) Pantera to embark on a reunion tour in 2023

The four will be headlining a series of major festivals across North America and Europe and staging some of their own headline concerts.
Billboard says that the lineup has been given a green light by the estates of the band’s founders, drummer Vincent “Vinnie Paul” Abbott and guitarist “Dimebag” Darrell Abbott, as well as Brown, who “guarantee[d]” fans last year that Wylde would not be coming on board if a Pantera tour were to happen. It’s unclear what changed his mind.
Earlier, it was reported that vocalist Anselmo and bassist Brown have signed a deal with Artist Group International to book their upcoming North American dates, though little was revealed at the time about who would be filling in for the late Abbott brothers — Dimebag was killed in 2004 during a show in Ohio, while Vinnie died in 2018 from a heart disease — on guitar and drums.
Wylde and Benante have both voiced their appreciation for the metal band’s legacy over the years.
Wylde, in particular, has expressed his interest if a Pantera reunion were to occur. The guitarist is also often thought of as the consensus fill-in for Dimebag due to his long-standing friendship with the Abbott brothers and his status as a legendary rock musician himself.
Founded in 1981, Pantera established themselves as one of the nation’s most popular heavy metal groups of the 90s after releasing their breakout album Cowboys From Hell. The band went on to receive four Grammy nominations and eventually disbanded in 2003 due to disputes between the members.
This tour marks the first time in nearly 20 years that the band’s reuniting after their breakup.
The post Update: Zakk Wylde and Charlie Benante to join Pantera on 2023 reunion tour appeared first on Guitar.com | All Things Guitar.