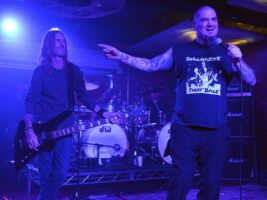 Pantera are set to reunite in 2023 for their first tour nearly 20 years after breaking up.

The band’s surviving members, vocalist Phil Anselmo and bassist Rex Brown, will be hitting the road for what is perhaps one of the most unexpected metal reunion tour of all time, given that guitarist “Dimebag” Darrell Abbot and drummer Vinnie Paul Abbott are both no longer alive.
Dimebag Darrell was shot and killed in 2004 during a show in Ohio, while his brother Vinnie died in 2018 from a heart disease.
Billboard reports that Anselmo and Brown have signed a deal with Artist Group International to book their upcoming North American dates, though it remains unclear as to who will be filling in for the Abbott brothers.
“We are thrilled to be working with such an iconic band and bringing their music back to the fans,” agent Peter Pappalardo said in a statement.
One thing we do know for sure, however, is that guitarist and Dimebag’s longtime friend Zakk Wylde will not be involved. Last year, Brown told podcaster Paolo Baron in no uncertain terms that a rumoured comeback with Wylde on guitar was not happening.
“It’s going to come up, and it wouldn’t be Zakk Wylde, I guarantee you that,” the bassist told Eon Music “I’ve just put it out there so we can get on past it.”
Formed in 1981, Pantera found success as one of the nation’s most popular heavy metal groups of the 90s after releasing the album Cowboys From Hell. The band went on to receive four grammy nominations and eventually broke up in 2003 due to disputes between the members.
The post (What’s left of) Pantera to embark on a reunion tour in 2023 appeared first on Guitar.com | All Things Guitar.