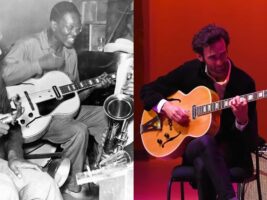 While on the road for his View With a Room Tour back in September, jazz prodigy Julian Lage stopped off at the Musical Instrument Museum in Phoenix, Arizona to play a set which included a rendition of the Charlie Christian and Benny Gordon 1939 jazz standard Seven Come Eleven, on Christian’s iconic guitar.
During the modern-day performance, Lage was joined by fellow musicians Dave King on drums, and Scott Colley on double-bass to show appreciation to the arch top that helped popularise jazz music.
The moment has luckily been captured for all to see as it has been posted on YouTube:

Regarding set up, Lage kept it unsurprisingly simple with his infamous dislike for pedals, by putting Christian’s ES-250 through his Mike Moody Vibro Deluxe combo amp; an evident change of pace from his Collings signature 470 JL and Fender Telecaster that normally accompany him when performing.
Speaking about the experience, the guitarist says it was an “absolute honour” to play the iconic axe, describing the ES-250 as “the coolest guitar ever”.
In more Julian Lage news, the jazz guitarist recently shared his clever and somewhat quirky method of travelling by plane with his electric guitar.
Speaking with Cory Wong on the Wong Notes podcast, he discussed how he used to unscrew the neck of the guitar and throw it in his back pack, before learning to keep the neck in blueprint holders (commonly used by architects), while the guitar bodies go in the backpacks.
The post Watch: Julian Lage play Charlie Christian’s 1940 Gibson ES-250 appeared first on Guitar.com | All Things Guitar.