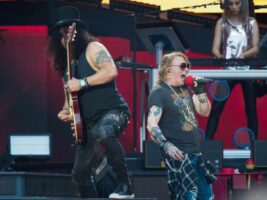 Alan Niven doesn’t care for a GNR reunion album: “The tantrums of youth look absurd on a 60-year-old”

Former Guns N’ Roses manager Alan Niven has shared his thoughts on the idea of a GNR reunion album, and the music industry veteran pulled no punches.

In a new interview with Classic Rock, Niven was asked about his feelings on Slash, Duff McKagan and Axl Rose reuniting as GNR for a tour and a new album. The manager responded, “I have no interest in seeing the band again  – their moment was February 2, 1988 [the date that the band’s infamous Live at the Ritz show was filmed]. The Aerosmith tour was really good too  – tremendous band response to tremendous audience response.”
As for the rumours of a new GNR record with Slash and McKagan taking back their places in the band, Niven said, “I have no hope of, or interest in, a new Guns N’ Roses album… the tantrums of youth look absurd on a 60-year-old. It’s a shame they have been creatively impotent since 1991.”
Niven has voiced similar opinions on GNR’s creative output in the past, asserting that Izzy Stradlin was the band member who was most responsible for their commercial success. “As far as I was concerned, it was [Stradlin’s] band,” he said, explaining, “He had the cool disposition and the unimpeachable street vernacular. Add to that the syncopation of his right rhythm hand, and you have a personification of rock ‘n’ roll right there. He was always the one who was always available for conference, for discussion. Axl was insular. Slash and Duff were mostly fucked up.”
Slash recently confirmed that Gun N’ Roses will be releasing several new songs in the near future. “We have stuff [that’s still] got to come out,” he said. “So that’s gonna be coming out piecemeal over the next… few months or something like that.”
Slash also confirmed the band intend to complete one more summer tour before then beginning work on a new record, having previously released Absurd and Hard Skool last year. The singles were the first songs to feature Rose, Slash and McKagan together since their 1994 Sympathy for the Devil Rolling Stones cover.
The post Alan Niven doesn’t care for a GNR reunion album: “The tantrums of youth look absurd on a 60-year-old” appeared first on Guitar.com | All Things Guitar.